The World's Full of 'Em 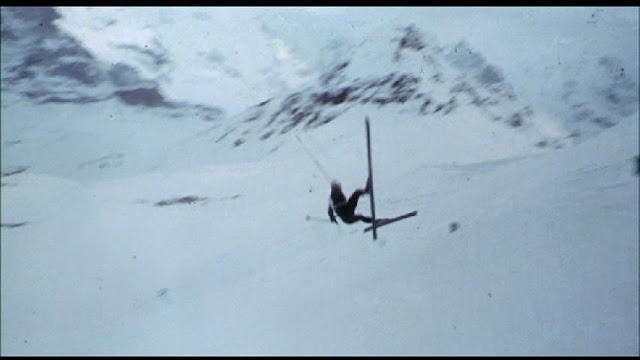 If the index at the back of Burning the Days, novelist James Salter's 1997 memoir, is anything to go by, the film for which the Occasional Screenwriter-wing of Salter's talent is best known is never mentioned by name in the book. Nor is its director, or any of the actors who appear in it, save one, Robert Redford, the film's star. However, Salter (who just died this past June, just nine days after his 90th birthday) does describe the movie, which is set in the world of competitive skiing in the lead-up to the Olympics:

The film was meant from the beginning to be about someone who was the opposite of that nearly vanished figure, the athlete who was supremely talented yet modest, who had the virtues of both strength and humility. Paavo Nurmi, the Finnish runner, a legendary champion...had always been an idol of mine. I pictured an old Nurmi, though knowing nothing about his personality, as a coach who had worked for years to have one of his racers win a gold in the Olympics, and who finally found the chance but with an individual he disliked, even despised, a crude, self-centered Redford. Athletes like this existed but perhaps not coaches like Nurmi.

This sounds very much like Downhill Racer, the film in question that finally was made in 1969. Starring Redford as David Chappellet and Gene Hackman as Claire, the coach. Ostensibly, Salter had been hired to adapt a skiing novel called The Downhill Racers by Oakley Hall, who is now probably most famous for writing the cult classic Western novel Warlock. Anyway, as I understand it, everything about that novel was tossed, save the setting and two-thirds of the title. Whatever leeway Salter was given by producer Richard Gregson and eventual director Michael Ritchie (it had already intriguingly passed through the hands of Roman Polanski) I couldn't say, but the script Salter finally wrote, or at least the version of that script that made it to the screen, bears some resemblance in tone and in the depiction of Chappellet to his first two novels. The Hunters, from 1957, is about an ace American fighter pilot serving in the Korean War who, when he joins a new squadron, suddenly finds himself unable to live up to his reputation. His 1961 novel, originally called The Arm of Flesh but later heavily revised in 2000 and renamed Cassada, after the lead character, is about another fighter squadron, but now during peacetime, and stationed in West Germany. Unlike the protagonist in The Hunters, the new pilot joining the squadron in Cassada is a bad pilot who will never be good. Indeed, in terms of attitude and story, Downhill Racer's Chappellet comes much closer to Cleve Connell in The Hunters, because both men share expertise. Yet in my memory there's a connection between Robert Cassada and Chappellet in that Cassada is oblivious to the fact that as a pilot he's hopeless, and Chappellet doesn't understand that he's hopeless as a person. Or perhaps he doesn't give a shit.

I'll go ahead and say now that Downhill Racer, which has just been released on Blu-ray by Criterion, is an exceptional film. It's quite unlike any other sports film I can think of, even though the plot does build, as almost all sports films do, to the Big Race (or Game, etc.). It's remarkable how quiet the film is. Save for a handful of scenes, much of it plays without dialogue or with only very incidental dialogue. There's a lot of chatter, but often you can pay attention to it or not. It's all about Redford showing up in the snowy mountains of Austria, to replace a skier on the American team who's been injured, and freezing everything that wasn't frozen already. His quiet arrogance and even nearly silent petulance slowly casts a pall over the team, as it outrages Hackman's Eugene Claire (Hackman, as you might assume, is ridiculously, effortlessly good here). But though Chappellet initially struggles, his genius on the slopes soon becomes undeniable. So now what? There's one on every team, just about.

It would be hard to argue, as early in his long career as Downhill Racer is, that this is at least close to career-best work from Robert Redford, not least because it's one of the very few roles, and performances, that doesn't beg the audience to love him. Anyone who complains about the cold remove of Stanley Kubrick might want to take a gander at not only what Ritchie and Salter pull off here, but Redford as well. You don't need to wish to project, at least through your films, a God-like indifference, as Kubrick seemed to want to do, to appear as someone whose total lack of warmth sets them apart from most of the rest of the human population. You merely have to behave as if no one else matters. On the surface, it would appear that Redford had to do very little to get this across, and in fact maybe he didn't have to do anything. It's a very difficult performance to break down because the character never has a "big" moment. If that's the case, the Redford (and Ritchie) deserve the credit for understanding how little needed to be done. But watch Redford in the few scenes set in Idaho, where Chappellet is from, and where he returns during a break in tournaments. He visits his father (Walter Stroud), and the apple doesn't seem to have fallen far from the tree by the way, and the two of them have a depressingly unfamilial conversation, if you can even call it that, while Chappellet sits at the kitchen table eating Ritz crackers out of the box, and he visits his old girlfriend who doesn't quite seem to realize that he doesn't give a damn about her, until after they've had sex one more time, by which point you have to hope that for her the penny finally drops. But anyway, look at Redford here. How much does he do, and how much does he communicate about Chappellet? If your answer to both questions is "Very little," I would say "Okay, but how much is there to say about Chappellet?" Very little.

A fair chunk of Downhill Racer (though not as much as I'd remembered from my first viewing of it a few years back) is given over to a romance that Chappellet strikes up with Carole Stahl, the assistant of a manufacturer of skis who, once Chappellet's talent becomes apparent, is looking to him for sponsorship. What's interesting about this is that it both humanizes Chappellet, for brief periods anyway, while ultimately revealing how truly unpleasant a man he is. This is achieved not through any grand act, either. It's possible, I think to view the character as a sociopath, but the way that condition is currently understood, at least by Hollywood, the evidence for this must come through some act of violence, or extreme cruelty of some sort. But that's not where Downhill Racer leaves the relationship. I don't know whose idea it was, Ritchie's or Salter's, but the mutual "fuck you" that closes out this subplot is sublime. And by doing almost nothing other than turning his eyes into ice chips, Redford becomes a man you wouldn't even want to talk to about the weather (which is always cold anyway.

I've said little, too little, about Michael Ritchie, who creates a mood and atmosphere in Downhill Racer that drew me in, in the same way sports movies almost always do, while making that place I've been drawn into, by the end, almost completely off-putting. If this is the guy I have to follow and root for, and if this is all going to revolve around him, then no thanks. Downhill Racer is all white and blue and Scandinavian, but the fire you might expect to find when you retreat from the cold isn't there. The guy who's the asshole is the one who matters and who we have to pay attention to and who, pretty soon, will be calling the shots. Because he's the best.

The ending offers a further chill. Judging from the section in Burning the Days that Salter devotes to it (which is brief, and seems to have been included at all because Salter knew Redford for a while), it's not Salter's ending. He describes the ending he intended, and it wouldn't have been a bad one. But somebody, Ritchie I suppose, tweaked Salter's idea just a bit. But by "just a bit" I sort of mean "changed it completely." Yet not fundamentally. I prefer the ending the film landed on. It's a little bit mysterious, in a way, and in some way, however briefly, it robs sports films, and maybe sports, of their glory.
Posted by bill r. at 8:21 PM

Excellent piece, Bill.
I think the film is also of a piece with Ritchie's other work about sports and competition. I think he also quite successfully looked at American notions of competition and success outside of sports (e.g. SMILE, PRIME CUT). DOWNHILL RACER lacks the humor of BAD NEWS BEARS, SEMI-TOUGH or SMILE, but there are still similar themes prevalent.
While we can always wonder what movie Polanski would have made (which probably would have been great, too - who are we kidding), DOWNHILL RACER is really a great combination of the correct writer, director and star, which produced a unique film.

... to project, at least through your films, a God-like indifference, as Kubrick seemed to want to do...

Not sure what you're trying to say here. "God-like indifference"? Maybe you mean something more like a non-interventionist God, observing but not interfering. In any case, I'm not sure it's true.