Do You Like Capsule Reviews? Well Then Brother Guess What!

Here are a few "capsuled" reviews of films I have recently watched. I hope you enjoy reading them more than I enjoyed writing them. 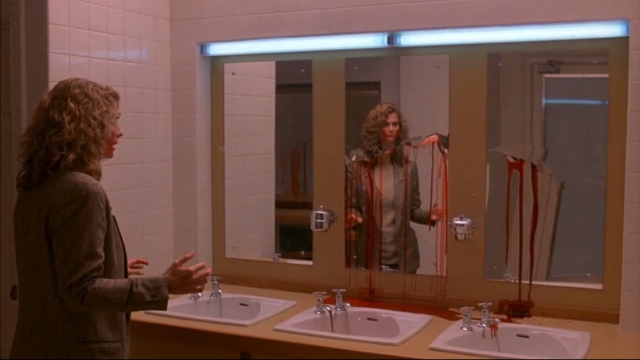 The Sender (d. Roger Christian) - First up is this 1982 horror film, just out from Olive Films and part of the, I don't know what you'd call it, telepathy-horror subgenre? Anyway, pretty clearly the idea was to follow the path carved out by David Cronenberg's Scanners and Brian DePalma's Carrie and The Fury. It's about a young man who winds up in a mental hospital following a suicide attempt, and the caring doctor who comes to believe that he really can make others feel, and experience, his hallucinations and dreams, which is to say, his nightmares.

The Sender is packed with familiar faces, whose wide variety of credits you simply don't really see coming together in one film anymore. Starring as the doctor you have Kathryn Harrold, who I consider sort of an icon due to her role as Albert Brooks' other half in his masterpiece Modern Romance. Plus besides which, there's just something about her, you know? (Interestingly, given her role in The Sender, Harrold hasn't acted since 2011, and is now a licensed psychotherapist in Los Angeles.) There's also Paul Freeman, best known as Belloq from Raiders of the Lost Ark as Harrold's boss, and Shirley Knight, who not long ago I saw in the very good, and very early, Francis Ford Coppola film The Rain People. Here, Knight plays a mysterious woman who visits the disturbed young man in the hospital. That disturbed young man, by the way, is played by Zeljko Ivanek, who is one of those character actors who has spent nearly the last forty years being always good in everything. More often than not playing a villain, in 1982 Ivanek hadn't yet been typecast, and it's nice to see him in The Sender playing someone we don't want to punch.

He's good, too, as is everyone else. And despite my implication that The Sender was merely riding the coattails of Cronenberg and DePalma, it's quite a solid picture. Setting the film almost entirely within the hospital was a good move on the part of director Roger Christian and writer Thomas Baum, and the sketching out of the employee and patient population is accomplished with a lighter touch than you tend to see from this era. While the nature of this story does mean that certain crazy, special effects-heavy sequences don't actually occur in the reality of the story (although, well, never mind), which I at least find a bit frustrating in a general sort of way, those sequences are handled really well, and at times are pretty spooky. And anyway, the film's not a cop out, and it doesn't cheat. Give it a look. 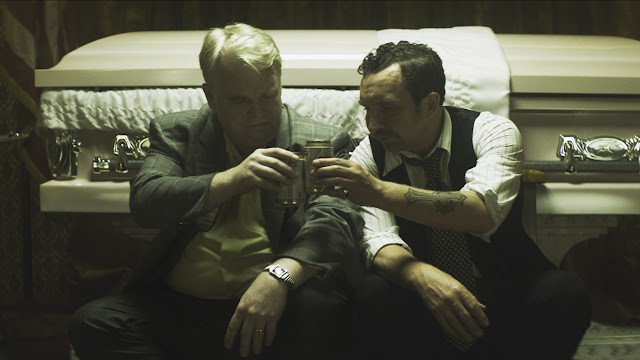 God's Pocket (d. John Slattery) - Of the handful of films that Philip Seymour Hoffman had finished but which had not yet been released at the time of his death in early 2014, the one I was most looking forward to was God's Pocket, the directing debut of actor John Slattery. In addition to Hoffman's starring role, which itself was more than enough for me, the film also featured John Turturro, Richard Jenkins, and Eddie Marsan, all favorites, and was based on a violent and weirdly funny novel of blue collar crime and neighborhood provincialism by Pete Dexter that I'd read years ago, and liked a fair amount. Then it came out, and people didn't like it very much, and anyway it only sort of came out in the first place. So it more or less drifted off my radar. Maybe it was a swing and a miss, which would be too bad, and which might make me sad to actually watch.

But I finally did watch it, and damn it, it's pretty good! I think some people may have been thrown by the fact that Slattery and his cast, which also includes strong performances by Christina Hendricks, Jack O'Connell, and others, do a very good job of translating Dexter's oddball tone to the screen. There aren't a lot of real jokes in the films, and it's often pretty brutal, emotionally and in terms of actual physical violence, but Dexter, and Slattery, recognize that the kind of behavior exhibited by some of these people, and the choices they sometimes make, none of which are unheard of among human beings, are so absurd that it's sort of grotesquely funny, just on the face of it. It's a hard tone to strike, and Slattery strikes it, but I suppose it's also a hard tone to like. But I liked it. 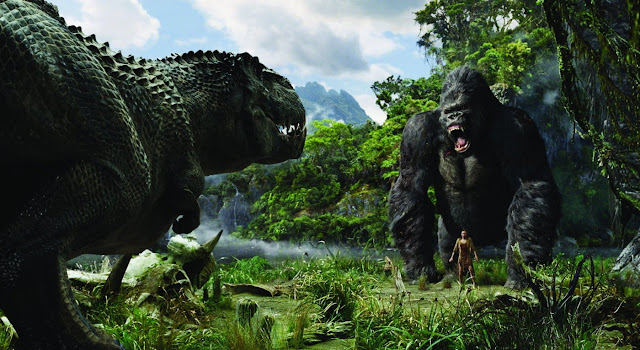 King Kong (d. Peter Jackson) - I was recently moved by illness to revisit this, Peter Jackson's three-hour remake of a 1933 Merian C. Cooper/Ernest B. Schoedsack motion picture which perhaps you've heard of. It occurs to me that Jackson's film came out almost exactly ten years ago (give or take a few months), and it's been about that long since I watched it all the way through. I've gone back to the opening Great Depression and Vaudeville montage, cut to Al Jolson's "I'm Sittin' on Top of the World," because I'm quite fond of that bit, as I once was fond of the the rest of it. After my recent viewing of the whole film, I'm still fond of that opening montage.

I should say here that I'm not bothered by the 187-minute run-time. In fact, I'd say most of my favorite stuff is in the set-up. There's something about a remake of a movie like King Kong that, unless you're fucking it up left, right, and sideways, adds a unique sort of tension, for me anyway. I felt it here, and I liked seeing what led Naomi Watts' Ann Darrow (a highlight) to meet Jack Black's Carl Denham (not necessarily a highlight but I appreciate the effort), and then to the boat, and all the people on the boat, or most of the people on the boat. It's like the build-up of a disaster movie, in a lot of ways, and that's often my favorite part of disaster movies.

The problem is that following his triumph with the Lord of the Rings trilogy, Jackson apparently lost all control. The absurd cartoonishness of his pre-Heavenly Creatures films (an era I'm not that fond of to begin with) does not marry well with the kind of huge-budget emotional spectacle that he's aiming for with King Kong. And it is emotional. Kong's death is quite moving, and Andy Serkis's performance as Kong is very good (I mean, I guess it is). But when it's just spectacle, or even when it's just people, this thing is a goddamn mess. I've rarely found the one-damn-thing-after-another nature of modern special effects blockbusters to be as enervating as this film was the second time around. The brontosaurus stampede on Skull Island is a complete wash -- at no point did I believe any of the humans were on the same plane of existence as the dinosaurs, and the sequence was just fucking endless. For how many minutes straight must we watch Adrien Brody frantically look left and then right? At a green screen, incidentally, which I swear I could practically see, covered though it was by brontosauri. Plus, I used to think the fight between Kong and the tyrannosaurus rexes was really cool and fun and such, but somehow I'd forgotten that through it all Kong is tossing Ann all over the place. She almost falls to her death but he catches her and throws her to another hand so he can punch a t-rex, and then he has to catch her with his foot while flipping through a whatever-the-fuck kind of tree...it's just too much. Too much by an absurd amount. Never mind that Ann would be dead as hell by the end of it all.

And unlike in The Lord of the Rings, never mind Heavenly Creatures, with the people here Jackson is basically hopeless. All the actors in the 1933 film had a better sense of when to pull back than pretty much anybody here. Clearly, Jackson wanted to honor that era of filmmaking stylistically, but he shouldn't have. Trying to act like that when you're not that kind of actor is death, and I actually think Jack Black (not exactly the subtlest of actors to begin with) knew that right up to the point he delivers the line "It was beauty that killed the beast." And he knew it while delivering it, too. You can almost see him thinking "Oh no, this is going to be too much, this is going to be too much, I should pull back, Peter's wrong about this I need to do someth - 'IT WAS BEAUTY THAT KILLED THE BEAST' - shit goddamnit damn it god shit." Something like that happened, I bet.

Also, that bit where Adrien Brody types "Skull Island" in slow motion while saying each letter out loud, making everybody look at him in terror, is an idea so bad, and a bad idea executed so terribly, that I almost can't believe it, or even speak about it rationally.
Posted by bill r. at 7:03 PM

I think the problem with KK is endemic (pandemic?) of most monster (get it) budget movies, in that the director has no restrictions on what is possible. And because of that the "if you can dream it, you can do it!" ethos runs amok. JAWS was the movie it was precisely because the stupid mechanical shark didn't work, forcing Speilberg to work for it.

I didn't see the other one.

I think Spielberg is mostly very good at using the technology in a way that keeps it within the realm of what it can do really well. Jackson was so used to making movies for $15 that once he got all the freedom in the world his brain exploded.

Also, there were TWO others, jerk!

For some reason I seem to remember The Sender first appearing on network TV one night around '82, as if it never even showed up at the movies. That was the first I heard of it anyway. Don't think I ever got around to watching all of it, now that I think about it, though I heard good things.


King Kong (d. Peter Jackson) - I was recently moved by illness to revisit this...

Wow. Wow. Wowwww. That's all I can say. I'm not feeling too great, myself, and the mere prospect of enduring that one again, and in such a state, leaves me pondering the sweet release of death as an infinitely preferable alternative. In fact, just reading about it has my stomach preparing to remove itself and its contents to greener, CGI-free pastures. And I don't even remember that junk with the typewriter, yet somehow it seems to sum up the entire misbegotten enterprise in one hilarious image, a whole new level of self-satisfied cinematic stupidity.