They're Drafting Everyone These Days 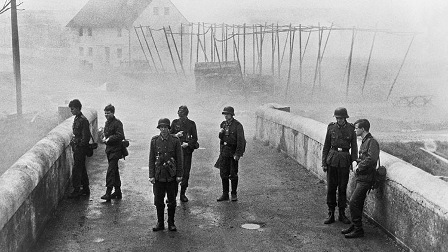 Bernhard Wicki's most famous, or at least most seen, work as a director must be the German sections of The Longest Day, the 1962 Word War II epic, which, in a stab at democracy or something, producer Darryl F. Zanuck farmed out to three directors: Ken Annakin, Andrew Marton, and Wicki. Roughly speaking, the idea was to have the directors handle the locations that corresponded to their own nationality, but there was an arbitrariness to the gimmick -- the British Annakin also took care of the film's French material, and Marton was actually Hungarian. But Zanuck nailed it with Wicki, who in addition to being German was also untainted: due to his association with a German youth movement that was not the Hitler Youth, Wicki was sent to a concentration camp in 1939. This offense not being one from the long list of Hitler's unforgivable crimes, Wicki was eventually released, at which point he fled Germany. He didn't return until the war was over. In the post-war era his film career began, not only as a director but also as an actor, appearing in, among others, films such as Antonioni's La Notte, Fassbinder's Despair, and Wenders' Paris, Texas.

Wicki's career in Hollywood, once he got around to it, didn't last very long. The most notable American film that he directed by himself is Morituri, a 1965 World War II thriller starring Yul Brynner as the captain of a German supply ship transporting rubber, much needed by the Nazis, from Japan to Germany, and Marlon Brando as an anti-war German expatriate living in India who is coerced by the British into agreeing to gain passage under false pretenses, on the ship and sabotage it so that the boat can't be scuttled, and the rubber can be commandeered by the Allies. Long story. The fact that Brando's character had to be blackmailed into taking on this mission, and that even though his pacifism is found wanting as a philosophy in the face of the Nazi brutality he witnesses on the ship he chooses a course of action that intentionally hurts both the Nazis and the Allies, these things comprise a strange and conflicting set of morals that I don't believe Wicki had fully come to terms with.

Set Morituri (which, otherwise, I think is a solid piece of work, and I think Brando is wonderful in it) against the film that probably got Wicki that gig in the first place, as well as the Longest Day job: 1959's The Bridge, said to be one of the first anti-war films to come out of Germany after the war, an Oscar nominee for Best Foreign Language Film, and released on DVD and Blu-ray last week by Criterion. Based on an autobiographical novel by Gregor Dorfmeister, it takes place near the end of the war, when the Nazis were at their most frantic. Losing badly but refusing to surrender, Hitler began literally drafting children and sending them into combat. In The Bridge, the first hour or so follows seven boys no older than sixteen, all friends, as they face heartbreak, pursue girls, follow the war's progress with an excitement their elders do not share, and wonder, with some eagerness, if they'll ever get drafted. One of them, Karl (Karl Michael Balzer), is in love with the housekeeper who helps his father and him. Another, Klaus (Volker Lechtenbrink) has a relationship with a pretty schoolmate which, when the draft notices finally do come in, he's in the process of botching. He so badly misjudges their last night together before he goes to basic training, and doesn't even realize he's misjudged it, that I thought "You poor stupid Nazi." That's not the only time the viewer might be moved to think such a think while watching The Bridge.

The Bridge has an interesting air of melancholy in the first half. It's interesting because you might normally expect that to come closer to the end. But Wicki chooses to not pretend that his audience doesn't know how this will all end, nor that the adults in his film -- the boys' parents and teachers, even in some cases their superior officers -- are any more delusional. When the children betray any amount of exuberance, or even a feeling of duty, about their pending military service, the adults tend regard them with unspoken pity. Once they are drafted, that sense of pity and melancholy turns to one of straight doom. On their first day of basic training, they're awoken in the middle of the night because the Allies are approaching. For a complicated set of reasons, the seven boys are given what is thought to be a cushy, nothing job of "guarding" the bridge into their own town, which is scheduled for demolition anyway, but misunderstanding, panic, and a relentless Allied assault soon transforms this bridge into a genuine battleground.

The morality of the film is complicated. Wicki subtly acknowledges Nazi atrocities and the basic wrongness of serving that cause without ever making the film about that. This allows the film to, for instance, make one of the characters who has some sympathy for the boys' hopeless situation, not only a card-carrying Nazi, but a True Believer. Similarly, the officer set to command them on their bridge-guarding detail (which he also believes is better suited for relaxation than combat) is about as kindly yet professional an officer as a young recruit could hope for. Yet while watching him, I couldn't help but think "How many Jews did you round up?" The Bridge invites that question but I'm not sure it does so intentionally. It may have still been necessary in 1959 to pull back from certain things, I don't know; beyond that, the film wants to be less about World War II than about "war" as a concept, but in my view its tough to use World War II for that purpose. There's simply too much basic morality, too much necessity in the waging of it, to contend with. This is why Kubrick's Paths of Glory is one of the greatest anti-war films, if not the greatest: it's about World War I, a ridiculous war.

Nevertheless, little of this is in The Bridge itself -- it's the sort of stuff you pull out of it later. But The Bridge, itself, is terrific. When the melancholy falls away, it becomes a film of pure savagery. The brutality of the violence is shocking for the time, and though the point Wicki wants to make pushes him to heighten that brutality to a level that is sometimes executed clumsily, more often than not it's incredibly effective. And I was pleased to see the one American soldier who gets any lines portrayed well, in contrast to the absurdity of the few American characters in Morituri. Then again, this depiction in The Bridge is in keeping with the rest of the film. The American soldier is, after all, an adult, and he, like most of the adults throughout the film, he wants to convince these boys that what they're doing is foolish. It's foolish, and pointless, and they don't understand. From their point of view, however, since they were children they'd been taught to fight for the Fuhrer and the Reich. Now that they've finally been given the opportunity, why should they be told to run away?
Posted by bill r. at 7:15 PM