It's Dangerous to Taunt Death 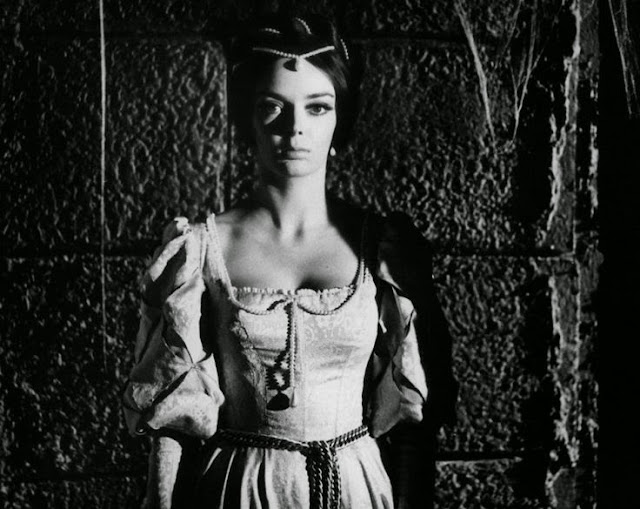 Barbara Steele, one of the premiere horror actresses of the latter half of the 20th Century, never really did a nude scene. I point this out only because when you consider what the genre started to become in the 1960s, especially in Europe where Steele made most of her films, that's part of the job description not a lot of her contemporaries were able to avoid. This isn't a judgment going in either direction, but you'd think that if you were an attractive woman who made more than one Italian horror film in the 60s or 70s, at some point you were going to be shown sleeping nude above the covers. But not Barbara Steele, and in fact how often was she positioned strictly as a sex symbol, or even partly as one? She made a lot of movies and I haven't seen as many as I should have, but I think not too often. Maybe I'm alone here, but this strikes me as a unique state of affairs.

It's on my mind at all because just recently I watched Steele in 1964's The Long Hair of Death, directed by Antonio Margheriti and co-written by Margheriti, Ernesto Gastaldi, and Tonino Valerii, each of them taking on Anglicanized pseudonyms, such a Margheriti's "Anthony Dawson." Most of Margheriti's career was conducted under the name, sometimes with the middle initial M. stuck in there -- he was also behind Yor, the Hunter from the Future, Horror Castle with Christopher Lee and, with Sergio Corbucci, co-directed Castle of Blood which also featured Steele. This film, The Long Hair of Death, which is now out on Blu-ray courtesy of Raro Video, is, as far as I can remember, the first of his films I've seen, and I have to tell you, Yor, the Hunter from the Future has become a more attractive prospect than it previously had been.

So back to Steele. She plays two roles here, although...well, never mind, but anyway in the beginning she plays Helen Karnstein, the eldest daughter of Grumalda (Laura Nucci) who, as the film opens, is about to be burned at the stake by order of Count Humboldt (Guiliano Raffaelli) because, supposedly, she used her witchery to murder Humboldt's brother. So claims Humboldt's son Kurt (George Ardisson) anyway, but Helen knows it's not true and fruitlessly pleads with Count Humboldt to reconsider. He doesn't, Grumalda is burned alive shortly after placing a curse on Humboldt's family, and Humboldt murders Helen, leaving her younger sister Lisabeth alone to be cared for by the Humboldts. Lisabeth grows up to be played by Halina Zalewska, and is married off to Kurt, the true killer of his father, Count Humboldt's brother, and a man set to eventually inherit the entire family fortune. Then one night, Mary shows up (Barbara Steele again).

There's a lot to like about The Long Hair of Death. Ardisson is properly awful as the villain -- in this film he's like a sinister Troy Donahue, which is exactly what the character calls for. The whole thing is not unlike a Tales from the Crypt story, with its final karmic blow, but it's also not unlike what Edgar Allan Poe's script for The Sting might have looked like. The main plot involves Kurt having an affair with Mary and the two of them planning the murder of Lisabeth, but given who plays Mary there can be very little doubt about where this is all heading. I would not call the result predictable because that implies a mistake was made somewhere. Instead, like in The Sting, we know what the intended end result is and we're waiting to see how they get there. The Long Hair of Death orchestrates nothing quite so elaborate as David S. Ward and George Roy Hill did, but that's fine, and not needed or even wanted here. But it's kind of fascinating to realize you're watching the Gothic horror version of a long con.

And Steele is terrific (though dubbed), and you can see pretty clearly why she was and remains so popular. When she appears in this film, or Bava's Black Sunday, she's able to become part of the visual design simply by showing up. "Ethereal" is the wrong word because her presence is too solid. Her beauty was Gothic -- she looks like old castles and the white-skinned ghosts that slide through them and the black trees outside. She looks like the genre itself.
Posted by bill r. at 8:52 PM

I haven't seen this one, but I enjoyed another "Dawson"/Steele vehicle, CASTLE OF BLOOD/DANZA MACABRA. Same kinda flick, much better than one would expect.