You Never Think About Your Life

I watched some movies recently. Are they on video right now? Yes. All of them? Well no. But soon! Here, let me explain... 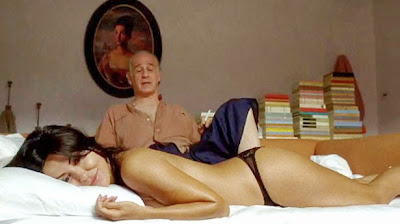 The Great Beauty (d. Paolo Sorrentino) - Last Tuesday, Criterion released Paolo Sorrentino's The Great Beauty, just a couple weeks after it won the Oscar for Best Foreign Language film. So clearly everything's coming up Sorrentino lately, just a couple of years after his previous feature, This Must Be the Place, starring Sean Penn as an aging glam rock 'n roll star turned Nazi hunter (for some strange reason, I haven't seen this yet) was met with some unhappy bafflement. And in truth The Great Beauty hasn't been greeted with only applause -- from what I've seen, it's a somewhat divisive films, and some of the unconvinced can be rather venomous. Why's that, I wonder.

The film stars Toni Servillo (absolutely sensational) as Jep Gambardella, a middle-aged writer whose one novel was published decades ago. It's been mostly forgotten, and he looks back on this young man's work with what Dennis Potter once called "tender contempt." Now Jep spends his time writing culture reviews and articles and living it up at night, his apartment, which overlooks the Coliseum, being one of what I must assume are many, many hubs of big-spending nightlife. But Jep's empty. He has a good time, but his mind is never far from a distant memory of Elisa (Anna Luisa Capasa), a girl he loved in his youth but hasn't seen in many years, and who, he learns from Elisa's husband, recently died, never having forgotten Jep.

All of which makes The Great Beauty sound like a rather tender story about aging and regret, which to some degree it is, but Sorrentino's film is also a colorful, grotesque, whirlwind attack on contemporary Italian obscenity, excess, and blindness. Though not precisely evil, things can get somewhat infernal back at Jep's place (a shot of a regular party guest realizing in horror that she's overdosing on cocaine is almost thrown away), and if Jep's fiddling while this all happens is self-aware, that doesn't excuse him. Sorrentino sets up his intentions rather ingeniously in the beginning, with a series of images depicting tourists as well as oblivious locals lounging against and clashing with the relics of the ancient world that are now scattered throughout Rome like trees or park benches. This modernity set against the ancient -- and Jep, possibly alone among his friends, does notice the past -- brings to mind Rossellini's Journey to Italy, which had George Sanders rushing away from his wife Ingrid Bergman so that he could enjoy Italy's nightlife while she wandered further into its past. Also evoke are Fellini, in various guises, and Antonioni, whose work in particular Sorrentino seems interested in trying to draw towards some kind of logical conclusion, and even Resnais, in Sorrentino's meaningless and almost frightening lost and wealthy characters, sprawled across the lawn.

The Great Beauty starts to have a tough time at about the ninety minute mark, around the time a particularly significant story development sends Jep reeling. Sorrentino appears to share Jep's struggle to right himself, and the film hit several points that feel like logical endings before skipping off in a new direction. And while The Great Beauty hardly resembles a film that was written with a screenwriting guide within easy reach (this is a good thing), it's hard not to imagine that Sorrentino doesn't now understand the pitfalls of introducing a vital character (I'm thinking of the 104-year-old nun, here) three-quarters of the way through your film. Be all that as it may, The Great Beauty nevertheless remains a sort of glorious act of flag-planting: Sorrentino has wrapped up the major landmarks of Italian cinema into one bemused, disgusted, sad, and hopeful package. The stain that is the prime ministership of Silvio Berlusconi has often been noted when discussing this film, and while that would logically be Sorrentino's inspiration, The Great Beauty is a greater and more sympathetic biopic than that man could ever hope to deserve. 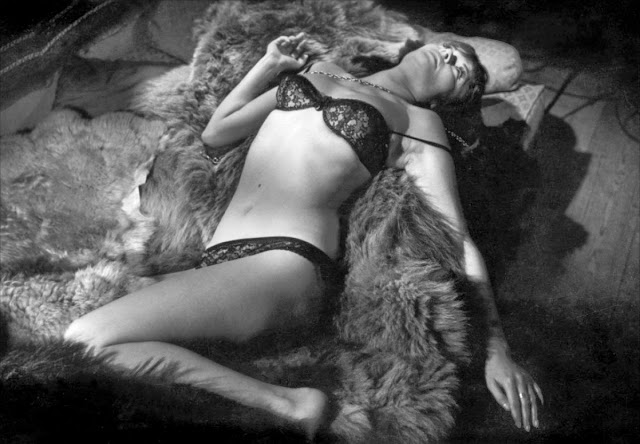 L'Immortelle (d. Alain Robbe-Grillet) - Speaking of Alain Resnais, sort of, on Tuesday Kino Lorber's Redemption line will continue its Alain Robbe-Grillet revival with their release of writer/director Robbe-Grillet's 1963 debut L'Immortelle. Robbe-Grillet had written Resnais' Last Year in Marienbad a couple of years previously. That experience appears to have stuck with Robbe-Grillet, let's say, because frequently resembles that earlier film, prominently using, for example, the imagery of people standing completely still and spread over a confined landscape like chess pieces. It's been some time since I saw Last Year in Marienbad, but here the ultimate effect of this effect is one of almost horror-film unease. This partially despite, and partially because, of the fact that L'Immortelle is very consciously a crime thriller, or "crime thriller." Despite their clear relationship to one genre or another, I've found it almost impossible to comfortably categorize the Robbe-Grillet films I've seen so far, and it's no less difficult here, even though it's nowhere near as aggressively post-modern as Trans-Europ-Express, which I wrote bout earlier this year. In the case of L'Immortelle, Robbe-Grillet's story is a simple one. Jacques Doniol-Valcroze plays a man traveling through Turkey. He stops for directions and finds himself in the company of a mysterious woman played by Francoise Brion, with whom he naturally falls in love. There's much he doesn't understand about her, but she's game and alluring and then one day he can't find her. She doesn't answer his calls, she doesn't call him, or leave a message with his somnambulant landlady, nothing. Obsessed, he begins searching for her, and L'Immortelle begins to take on the air of the kind of thriller that might have been written by Patricia Highsmith, or if you were too high-falutin' to call it a thriller, maybe by Paul Bowles.

Doniol-Valcroze's quest, and the form it takes, is classic thriller material, but of course Robbe-Grillet's concept of where this should all end is all his own. Scenes repeat, but with different characters. A child seems to appear in two places at once (and the man witnessing this seems not the least bit alarmed by it). The barking of a Satanic gangster's two dogs can be heard at any time. An antiques dealer from whom Doniol-Valcroze purchased a strange and supposedly rare figurine assures him that the exact piece that has reappeared in his window cannot be the same one. And in fact I'm eschewing one bit of plot that occurs about halfway through and completely blows L'Immortelle up. And which by the end means exactly what?

As I've said, the overall atmosphere of this film is one of horror, not unlike, actually, certain stories by Robert Aickman or Reggie Oliver, or any other classically-minded writer who sends an unwitting tourist into a world he or she can't hope to understand. Not that Turkey itself is the source of horror, but Doniol-Valcroze's character isn't depicted as wholly ignorant of the language just because. He's an easy mark for whatever it is that gets his, or their, or its, hooks into him.

A Touch of Sin (d. Jia Zhangke) - Another major 2013 film, this anthology of violent stories about China will also be arriving on Blu-ray from Kino Lorber, on April 8. Jia Zhangke loosely adapts several true events to tell the story of an angry miner (Wu Jiang) who suffers physical and mental abuse as a result of corruption in his village before finally snapping and going on a murder spree; a brutally violent thief (Baoqiang Wang); a receptionist at a sauna (Tao Zhao) who kills a man threatening her with rape; and a young man (Lanshan Luo) who is driven by financial and romantic desperation to commit suicide.

Money is at the heart of each of these stories, and the belief of the corrupt in that the ability to spend entitles them to everything they want. Now what other 2013 film does that remind you of? It's not just that, either -- coincidentally, and in pursuit of a slightly different goal, the final shot of A Touch of Sin mirrors the final shot of Martin Scorsese's The Wolf of Wall Street. But maybe not even slightly different. The final scene of The Wolf of Wall Street is set in New Zealand, which suddenly turns the target of the last shot, and the whole film, into a global one, while A Touch of Sin is a local story, top to bottom. Nevertheless, both final shots could perhaps be titles "Look At Yourselves," which is always a fair question.

A Touch of Sin is not otherwise particularly Scorsese-esque, though it, like many Scorsese films, is quite violent. This being my first Jia Zhangke film, I don't know if he's ever dealt with such extreme violence on screen before, but it does often seem like it's something he's not used to, and is constantly grappling with find new ways to make it both fresh and visceral. When the miner begins blowing people away with his shotgun, it's a shock, however easily this turn is predicted, but as Jia explores new angles from which to film it, or new tracks along which to follow the movement of bodies, it's hard to not think something more blunt and less glossily splattered might have not made his point better. If such a suspicion occurs to you, a moment later on, when Baoqiang Wang's thief approaches a man and woman outside of a bank and abruptly shoots the woman in the head, might confirm that you were correct. It's a horrible moment, not polished, seemingly not choreographed (though of course it was). One uncomfortable possibility in the change in styles is that the people the miner kills (with one exception) "have it coming" -- see also the killing of the potential rapist by Tao Zhao's receptionist. I'm not about to wring my hands over a killing done in completely justified self defense, but it's filmed in a way that is meant to remind the viewer of a martial arts or samurai film. Mind you, Jia doesn't completely flip his lid here, but the associations are unmistakable, and the design of the moment strikes me as not an entirely good idea. There are as many ways to film violence as there are to film a dream sequence, but I think filmmakers today too rarely appreciate the power of bluntness, and perhaps don't realize how even the slightest stylization can rob the moment of its slap. In A Touch of Sin, I don't think Jia Zhangke lands as many slaps as he intended.
Posted by bill r. at 6:02 PM

I am not familiar with Jia Zhangke's previous work either. But my understanding from something I had read was that A TOUCH OF SIN started off as a way for the director to use familiar martial arts film tropes as a departure point with the intention of extrapolating from there into real-world situations.

Well, I can't say he really does that either, outside of the one killing I described.

When I say that other violence is stylized, I don't mean it's all similar to martial arts films. It's stylized in a way to appear more brutal, but the effect is weakened.