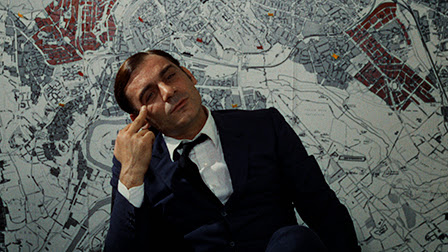 Tomorrow, Criterion will be releasing on DVD and Blu-ray director Elio Petri's Investigation of a Citizen Above Suspicion. If it's necessary, which it probably isn't, or in some way appealing, which I've decided it is, to categorize the film a certain way, then I'd have to say this is one of the more unusual "first-person" crime films I've seen, though in certain ways it's hardly unprecedented. Because while Investigation of a Citizen Above Suspicion is a political film to its core, it's hard for someone like myself -- by which I mean, and this is simply not the least of it, someone who is not a far-Left Italian in the 1960s and 70s -- to not take note of how it is in line with the classic and twisted American crime fiction of the mid-20th century, as in, your Jim Thompsons and such. This could be a re-thinking of Pop. 1280 or The Killer Inside Me -- it's not impossible to imagine the Lou Ford who burns up at the end of The Killer Inside Me somehow surviving and subsequently going crazy in some new way.

Petri's film, which he co-wrote with long-time collaborator Ugo Pirri, is about a Roman chief inspector (Gian Maria Volonte) who as the film begins is engaged in two quite important activities: transferring from his department's homicide division to political crimes, and murdering his lover (Florinda Bolkan) for I think more than one reason, quite honestly, but more than anything to, he hopes, show that he is in fact not as above the law, not as out of the reach of justice and deserved punishment, as the Roman police of the time were said to be. Achieving this goal proves quite difficult. In the booklet that accompanies the Criterion disc, an excerpt from Pirri's memoir The Cinema of Our Lives details the conception, creation, and political fallout of Investigation of a Citizen Above Suspicion, the most internationally successful film of Pirri's career, and, with the possible exception of the 1965 Robert Sheckley adaptation The 10th Victim, Petri's as well (Investigation of a Citizen Above Suspicion won the Oscar for Best Foreign Film in 1971, for what that's worth). After laying out the multifariously infuriating nature of Italian politics at that time, Pirri describes more or less what you might expect: excitement among the filmmakers for what they were doing; the fear that the resulting film, however good, might land them in prison; angry criticism aimed at them not just from the Right, but from the Left -- for a host of ridiculous reasons, from disdain at the film being made more or less through mainstream channels to completely misunderstanding the intent of the script -- and so on. The actual outcome, which I'll leave for you to read up on yourselves, was rather different than they expected, and even the least of their fears didn't come to pass -- the film was not banned, in other words, though an uneasiness over what might happen did lead Pirri and Petri to make a rather odd change to the ending. Pirri is correct that the change doesn't alter the gist of what happens, but it does have a curiously deadening effect.

But anyway. Investigation of a Citizen Above Suspicion is anchored by the rather extraordinary performance given by Gian Maria Volonte. His chief inspector (like LT in Abel Ferrara's Bad Lieutenant, he's given no other name) makes a seamless transition from cold-eyed and ruthless investigator to passionate murderer to crazed and perverse seeker of justice, and Volonte is terrifyingly adept at each mental state. It says something, I think, that even when his chief inspector is at his most untethered, Volonte's performance still shows hints of what once must have been competence (if not morality, although if you go far enough back, who knows?) -- it's a piece of satire that still manages, unlike most satire, and in fact unlike the very intent of most satire, to depict a full human being, however deep in shadow that fullness may be. So as I say, Volonte is extraordinary. The rest of the film isn't too far behind him, though I do have my issues with it, some of which, I'll confess, may be somewhat knee-jerk in nature. And even now I can see my skimpy objections on political grounds aren't fair -- if Pirri and Petri announce some of the Roman Socialists which make up the fringe (which is fitting enough) of the movie's action are not merely Socialists but actual Stalinists, well, that is not what , Pirri and Petri, were (well, not Petri anyway, I don't know about Pirri). I'd argue, then, that there's more to be satirized in all this, with Leftist terrorists being an actual threat in Rome at the time (in the excerpt from his book, Pirri stops just short of betraying some sympathy for the police, and while that means he doesn't betray that sympathy, you can tell when he stops short).

However, every film doesn't have to have everything in it, and anyway as fiercely political as Investigation of a Citizen Above Suspicion is, I'm not primarily interested in it on those grounds. I'm interested in it on Jim Thompson grounds, and I'd have to say it's quite thoroughly successful on those terms. Pirri never claims to have been inspired by Thompson or any other American crime writers -- and I focus on Thompson because his stuff offers the most clear and direct comparison -- but along with Michael Winterbottom's adaptation of The Killer Inside Me, Petri and Pirri have created here the best Thompson adaptation I've ever seen, however unintended or literally not actually that it may be. But boy, it's all there -- the grotesque sexual fetishes, the man in power who hides in plain sight his violent psychopathy, the ability of those around him to ignore all the evidence because to allow themselves to become conscious of the truth would either endanger their lives or their positions, or in some cases perhaps they're just straight-up dopes. This is The Killer Inside Me! The very concept behind Investigation of a Citizen Above Suspicion is one Thompson, had he thought of it, would have savored. Thompson did live long enough to have been able to see this film, and if he did I imagine him sitting in the theater, shaking his head, and muttering "Goddamnit."
Posted by bill r. at 9:20 PM