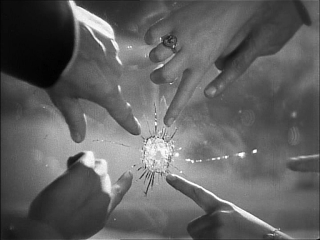 Alfred Hitchcock famously told Francois Truffaut that his 1934 film The Man Who Knew Too Much was the work of a talented amateur, whereas his 1956 remake was the work of a professional.  I'm not sure I'd phrase it quite like that, but I have to say, having just watched the earlier film, which Criterion is releasing today on DVD and Blu-ray, that I can see what he means. This is of course not to say that the 1934 version is anything at all like a bad film, but watching both recently is pretty revealing. The 1956 film, starring Jimmy Stewart and Doris Day in roughly the roles originated by Leslie Banks and Edna Best, has always been one of my favorite Hitchcock films, one I've been watching since I was a kid, and I have a vague memory of being surprised, as I got older and learned more about Hitchcock and what other people thought of him and his work, that it was considered to be not that big a deal, comparatively. I was never clear on why that is, and watching it again last week I'm still stumped. Watching it in conjunction with the '34 film leaves me even more stumped, because it seems to be the thing to prefer the original. I think that's the thing in just about any applicable instance you can name, but I don't understand why it must be that way.

The plots of the two films are surprisingly similar -- I don't know what's surprising about that, really, but I was surprised, for whatever reason -- and it involves a married couple with a child on vacation (Switzerland in '34, Morocco in '56), when a man they meet along the way is murdered in front of them. With his dying breath, he gives them information about an upcoming assassination plot. When the would-be assassins figure out what the couple know, they kidnap their child (a son, played by Christopher Olsen in '56, a daughter in '34, played by Nova Pilbeam, which is a hell of a name) and threaten violence if the couple spills the beans. This leaves the couple with no other choice but to try and save their child on their own, and if they have time maybe swing by and stop the assassination, too, though it's an interesting element of both films that Banks/Best and Stewart/Day are both willing, for a while anyway, to let the assassination go off without a hitch as long as their son/daughter makes it through okay.

The differences between the two films can probably be guessed at once you notice that the original film clocks in at 75 minutes, while the remake hits a full two hours. In his otherwise engaging commentary track for the Criterion disc, Philip Kemp states a very strong preference for the '34 film, noting with some disdain that the remake goes on so long that by the time Hitchcock finally gets around to having Stewart and Day's child kidnapped, the '34 film was already halfway over. Mathematically, this might be correct, but I can't imagine what it proves about the quality of either film. The 1956 The Man Who Knew Too Much strikes me as a very rich film that takes the time to depict a marriage and family that is quite at odds with what an audience (an audience today, at least, but my reasons for qualifying that statement would fill a whole post probably, so forget I said anything) would expect from an on-screen pairing of Stewart and Day. The two of them apparently have "monthly fights," and Day has been told by Stewart that she takes "too many pills." It's not a miserable marriage, but it is a delicate one, at least, and you can't build this sort of thing in ten minutes so that the last 65 can be given over to the thriller plot. Plus, Day's character is a famous singer, which is important to the plot ultimately (whether that all adds up to something effective or not I'll leave to you, but I happene to think it does), and her existence as a celebrity, not to mention Stewart's general surliness, gives the whole thing just that extra bit of canvas for the upcoming tension and emotion to really spread itself. Clearly, what interested Hitchcock in 1956 were not always the same things that interested him in 1934, and to see him expand on the people that populated his films is not, I shouldn't think, something to bemoan. The only downside as I understand Kemp's point is that you have, or get, to watch the movie for 45 more minutes.

What I think I'm implying here is that the 1934 film is something of a technical exercise, and I kind of think it is, but what I must make clear is that not only do I not have anything against technical exercises on principle, I would also much rather watch one of Hitchcock's technical exercises than I would the passion project of just about any other filmmaker. And so yes, the original The Man Who Knew Too Much is still a delight, regardless of my preference. It's interesting, given the film's brevity, to see how Hitchcock uses his time -- see the bit with the two police sharpshooters getting into position towards the end, for example. Mainly, though, it's the final shootout between the police and the gang of assassins, led by Peter Lorre, who should have been in most Hitchcock films but somehow managed to only wind up in this one [and The Secret Agent - Ed.]. The violence in this film is just on the light side of brutal, the standards of the time playing their part of course, but it's almost shocking, when the shootout begins, to see so many police officers being slaughtered during the assassins' initial desperate ambush. Then, too, when the assassins themselves begin to take their bullets there is, as Kemp notes in the commentary, an almost surprised reaction by some of them. This is most powerful during the murder scene that kicks the whole thing off. Louis Bernard (Pierre Fresnay) is dancing with Jill (Best) when a window breaks. Nobody seems sure what happened, and are prepared to carry on with their frivolity when first Bernard, and then Jill, notice the hole in his chest. His realization is actually rather touching, and this sort of thing cuts into the lightness and humor of much of the rest of the film, so that it never seems like a big game. See also the look of genuine terror on Pilbeam's face when she's finally rescued. The 1956 equivalent of that moment is the helpless sound Jimmy Stewart makes when Bernard Miles puts a gun to Stewart's son's head. Once Pilbeam is rescued, the tension is defused, which is the opposite of what's going on in Stewart's head at that moment, but the '56 film does wrap up with an almost ridiculous abruptness that the '34 film is somehow saved from through Pilbeam's terror and confusion.

Plus, of course, Lorre. As is usual with Peter Lorre, his Abbott is an enigma almost entirely by virtue of being played by Peter Lorre. He almost seems like he'd rather be kind than not, but doesn't fully understand why he should be or would want to be or why anybody else is -- he just knows it's desirable. After Leslie Banks has been captured in one of his attempts to save his daughter, Abbott says something about wishing he'd warned Banks to curb his fatherly instincts. The way he says it indicates that this kind of paternal devotion is something he, Abbott, understands exists because he is technically a person sharing a planet with several other persons, but as far as he's concerned it's a thing to be observed in others so that it can potentially factor into later plans, assassination or otherwise. Abbott is not a man free of emotion, as we see over the course of the film, but he is quite apart from most men, and not just due to his chosen profession. He is strange, eerie, charismatic, terrifying, funny, cold, clinical, different, humanely inhuman. He's Peter Lorre, in other words.
Posted by bill r. at 1:06 PM

Labels: Alfred Hitchcock, Criterion, The Man Who Knew Too Much

So this is what you were talking about on Facebook. The whole 34 film does in 75 minutes what the second film, blah, blah, blah.

Anyway, I agreed already but now that I see the actual example, I see even more your irritation. Longer is neither better nor worse and can be one or the other or neither. A film can just give me straight plot info and end in twelve minutes or give me something I might want to watch for two hours. I mean, hell, you could say of Citizen Kane that the opening newsreel tells the same story in ten minutes that the rest of the movie takes 110 minutes to tell. And, yes, you'd have to be a pretty big idiot to say that but it would be true. It would also be meaningless as the longer part of the story is intended to tell what was really happening behind all the quick relaying of life events.

Now, I have had the opportunity to see the original a couple of times and both times didn't. Maybe I will one day but a part of it has always been the assertion that the original was better. Again, like you, this bugs me and not having seen the original it shouldn't but it does and the reason is that I have seen the remake five or six times and every one of those times I've loved it.

One of the most annoying "critiques" of the remake, repeated by Siskel and Ebert on their episode covering the restored Hitchcock classics in the eighties, is that it's just a collection of great scenes but not a great movie. Well, it does have great scenes and those scenes do add up to a plot and that plot is followed through to its logical conclusion. But the way they tell it, it's a disjointed jumble of great shots amounting to nothing. Seriously, who in the hell started this nonsense?

And the ending is hilarious. Abrupt, yes, but I think that's the joke. I think it's the funniest ending to any Hitchcock movie, myself.

Well, this may have been the catalyst, but my Facebook thing was about the criticism in general. I've seen it a lot. That's why I wasn't specific. But as a criticism with no actual description of why you think the briefer of the two films is better, beyond the fact that it's briefer, it's infuriating and makes no sense.

I don't get what Siskel & Ebert are talking about, either. The remake is a really well structured, and well put together film. It's really polished. I've never understood any of the knocks against the '56 version, at all.

I was probably harder on the ending than I should have been, and I obviously get the joke, but watching it again the other night I was struck by how quick it is. I think it's a very emotional film, so I found it jarring.

Obviously, you should see the original, and I know you will. I doubt you'll like it more than the remake, and I don't know how anyone could, but I mean, still...Peter Lorre.