One of my favorite movies from 2009 is Dogtooth, directed by Yorgos Lanthimos and written by Lanthimos and Efthymis Filippou, about a husband and wife, mostly the husband, who have constructed a bizarre alternate reality for their three adult children to grow up in, one where the meaning of words as we – those of us fortunate enough to have not been doomed to exist in this family – know them have been altered, with the purpose, one assumes, of making the son and two daughters easily controllable, and making them unfit to live in the actual world beyond the high walls that surround the family home. Dogtooth is quite a bit stranger, and darker, and funnier, and more unsettling, than that brief description indicates (it also puts me in mind of the excellent episode of the new The Twilight Zone from the 1980s called “Word Salad,” featuring Robert Klein as a man who wakes up one day to find the English language gradually turning into gibberish), and, so it should logically follow, it made me very curious about this Yorgos Lanthimos character, and what his whole deal is.

After watching his most recent film, Alps from 2011, which is being released on DVD tomorrow by Kino Lorber, I’m no closer to knowing what his whole deal is, but whatever it is I’m still on board. Once more co-written by Lanthimos and Filippou, Alps very much resembles Dogtooth, not least because once again language comes in for a...beating? I don't know, but it seems clear that Lanthimos and Filippou look at the whole concept of verbal communication somewhat askance. In this film, four people -- two hospital works, a rhymic gymnast, and her coach -- have formed a group their leader (Aris Servetalis) has dubbed "Alps." It's not an acronym, but rather meant to refer specifically to the mountain range. The idea is that no other mountain range can replace the Alps, but anyone would be happy to have one of the Alps' peaks step in and sub for, say, Mt. Kilimanjaro. The Alps are irreplacable. And what the Alps, the group of four people, I mean, do, is they make contact with the families or friends of the recently departed and, for a fee, will play the role of the deceased for a period of time until the grief of those in mourning passes. Such is the idea, anyhow.

What's pretty key here, though, is that the premise of the film (if you don't know what it is going in) doesn't become clear until after Servetalis has pitched his idea to name the group "Alps," which, at the time, may not seem like such a big deal, beyond the fact that Servetalis chooses the name of the Alps highest peak as his own inter-group nickname. Pretty arrogant, but he's the boss, so fine. But then you know what this group is all about, and his explanation for why "Alps" is a good name becomes almost breathtaking in its presumption. So if these four people are the Alps, and nothing can replace the Alps but the Alps can replace anything, then as far as Servetalis is concerned his group is better than the dead people they're replacing. When you come to learn what kind of a person Servetalis is (he's a scumbag), this makes some kind of sense. But I mean, Jesus Christ. 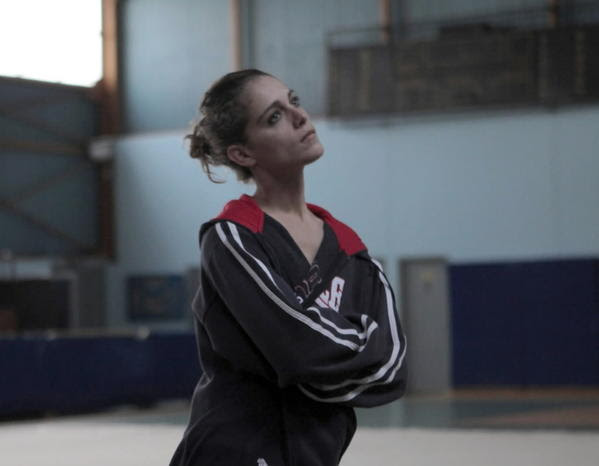 In terms of plot, there isn't much. Like Dogtooth, Alps is a series of scenes that depict what it's like to be in this group, and to be the kind of person that's in this group. And I don't mean "a group like this," I mean this group. Lanthimos is nothing if not specific, and he portrays the four main characters as being quite a bit removed from normal human society, steady jobs or no. The film opens with the rhythmic gymnast (Ariane Labed, who has a very Dogtooth air about her, even though she wasn't in that film) practicing her routine to Carl Orff's "Carmina Burana." When she's done, she explains her missteps to her coach (Johnny Vekris) by saying she would really rather perform to a pop song. Her coach responds by saying she's not ready for that, and if she keeps this up he'll break every bone in her body and then she won't be able to perform to anything. Later, the meek, frightened, desperately sad gymnast attempts to win the goodwill of her coach by stripping off her top and contorting her body into, I guess, gymnastic poses, while extolling his many virtues. As desperately sad as her character is, so is this scene, not least because it's very clear that this very thing has been demanded of her before.

The character who you might for a while think is the most with it is played by Aggeliki Papoulia (now she was in Dogtooth). She works in the hospital with Vekris, and it's through her that most of their clients are found. This would suggest that if Vekris is the president of Alps, Papoulia is the vice president (how these two ever hooked up with the gymnast/coach team to form this group is never explained, a good creative choice, as far as I'm concerned), and perhaps Vekris does consider her his second-in-command, but whether he does or doesn't, Papoulia is coming apart at the seams far more than even the gymnast. Papoulia's mental collapse, which takes the shape of her disturbingly close bonds with some of the clients, forms whatever narrative Alps has.

But there's so much more that's strange and interesting about this film. For one thing, I mentioned language, and how once against Lanthimos and Filippou mess with it. This comes from the lines the Alps have to memorize -- they're basically actors, after all -- in order to closely approximate the dead people they're stepping in for. We see them rehearse, not just among themselves, but with their clients, and it turns out the Alps are terrible actors. But somehow the repetition of words spoken by the deceased gets under the skin of at least Papoulia, even after the words have been repeated so often that the context falls away and it all becomes the spluttering of a madman, or madwoman. And speaking of acting: from Vekris's point of view, the process of successfully completing an Alps project involves almost no emotional buy-in, but rather the focus is on minutiae (which they're not even consistent about -- one dead man wore a certain kind of eyeglasses that Vekris demands the client provide, but the fact that the deceased was bald, and the Alps planning to step in is not, doesn't concern him) about the deceased's life and interests. When Papoulia or Servetalis home in on a hospital patient they think might soon be shown across, they pepper them with banal questions, such as "Who is your favorite actor?" The answers are always American, or anyway Hollywood (Jude Law is in there once) actors, and you wonder, with this kind of shit taking up all their planning, how any of their jobs can ever work.

And I don't know that they do. Much of the film's dark humor comes from seeing some of these in progress, and it's always absurd. What's more interesting to me, however, and this was also the case in Dogtooth, is that whatever his intentions, Lanthimos's brand of very dry surrealism does not finally reflect anything back at the viewer. The members of Alps are crazy, but this doesn't necessarily mean that anyone else is. Dogtooth was about a crazy family that had chosen to isolate itself from society, and very few people from the regular world get a look in (granted, one of the few who does has a lot of problems herself). That's not what Alps is about, but Lanthimos tells the story in a way that still isolates them, and in some cases we see reactions from the sane world to their behavior, and those reactions are not at all unlike what I'd expect from myself, or you, or anybody else. As for anyone buying into their services, well, grief does funny things to people. In any case, those services, it turns out, are not as close to Hospice-for-the-grieving as a thumbnail sketch might make you think. Knowing Servetalis's character as we eventually do, it's hard to not see them, or at least him, the mastermind, as chillingly, bewilderingly, delusionally mercenary. I give this business six months, tops.
Posted by bill r. at 3:12 PM