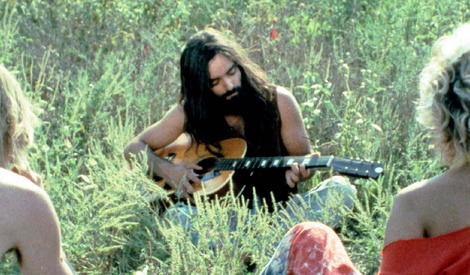 Jim Van Bebber began production on his intensely violent and bizarre film The Manson Family in 1988, and due primarily to financing issues wasn't able to complete it until 2003. In the intervening years, Marcelo Games, the actor playing Charles Manson, quit, which you might be tempted to think should have put the kibosh on the whole affair. But somehow, no. Part of this was luck because Van Bebber had finished shooting most of the scenes involving Games, and part was due the very nature of the film, the gist of which can be gleaned from the title. Van Bebber's film is more about the members of Manson's cult, and their journey from good-time idiot commune hippies out for drugs, sex, and some form, any form, it doesn't matter, of enlightenment to becoming, with bizarre ease, the men and women who, through the summer and fall of 1969, actually carried out the series of horrifying murders under Manson's burnt out direction that have cemented Charles Manson's name -- but somehow not Tex Watson, Patty Krenwinkel, Sadie Atkins, Leslie Van Houten, and others -- in the annals of American murder. Not to attach a motive which Van Bebber may have intended but which doesn't really blatantly announce itself through the film itself, and so much the better, but The Manson Family is a sort of corrective to that in the sense that Manson is an essential figure in the film, but more essential are the people who, as one character points out, put the bullets and the knives into the bodies of the victims.

The Manson Family isn't a film I'm prepared to recommend, by the way. It's probably a cop out to say that it resists such notions as "bad" or "good," but many people have and will continue to hate it, and many probably have good reason to. It was made very cheaply and looks it, almost all of the acting is weak and unprofessional, which follows given that none of the actors were professionals, but Van Bebber doesn't show much facility for dragging anything interesting out of that situation as, say, Steven Soderbergh has done. Also, functioning as it does, in part, as an exploitation horror film, many would no doubt balk at the rudimentary spook-show imagery -- Manson and Watson appear as the Devil during moments of either hallucinatory drug binges or murder -- as well as some even more rudimentary symbolism, such as when Manson is dressed as Christ and takes part in a blasphemous crucifixion. But where Van Bebber's critics don't have much ground to stand on, and the angle I've gathered many of them have taken, has to do with the film's violence, which is substantial and graphic. As you'd probably expect, even though this story has been dramatized with considerably more coyness in that regard several times in the past. 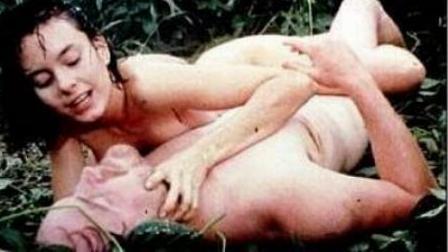 But shouldn't a much more direct approach also be...what's the word I want here? "Worthwhile" and "of value" and "desired" don't quite seem to illustrate why an extremely violent film about the Manson murders might be something other than trash. Especially given that the film is clearly coming from a tradition of trash, though trash of a, somewhat and depending on who you ask, relatively respectable type. Van Bebber travels in circles that include William Lustig and Buddy Giovinazzo and so forth, for example. So like I say, it depends on who you ask. But if you're asking me, or anyway if I'm telling you, The Manson Family contains scenes of the most uncomfortable and disturbing violence I've ever seen. This is violence that actually made me consider the act of murder as a thing that some people actually commit, far more than any of the more loudly debated horror films could even imagine. At one point, a character says something to the effect of "This is Hell," and I was left thinking, even in my admittedly removed role as an audience member, "Well, maybe." 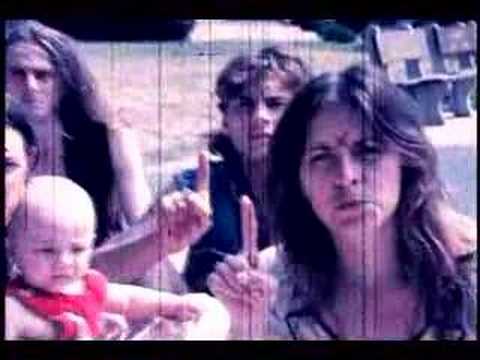 My reaction could perhaps be explained as a natural byproduct of my knowledge that the events depicted in The Manson Family are based on fact, but I promise you, I've seen Chuck Parello's The Hillside Strangler and Matthew Bright's Ted Bundy and Jenny Ash's The Night Stalker, and all of those are based on real murders and all of them are also useless garbage. More to the point, I may have felt disgusted while watching each of those (maybe not The Night Stalker, which I remember as being more stupid than anything else), but I was never moved. And The Manson Family is somehow moving. The murders -- of Gary Hinman, Jay Sebring, Abigail Folger, Wojciech Frykowski, Sharon Tate, and Leo and Rosemary LaBianca -- all occur in the film's final third, and Van Bebber does not try to take us into the lives of any of the victims at any point during the film. We only meet them in the seconds before they're going to be killed. Gary Hinman is sitting in his car, and then Tex Watson (Marc Pitman) is shooting him. Wojciech Frykowski is shown lying on a couch for a few seconds before Krenwinkel (Leslie Orr) is on top of him. But it is the physical work of the murders, the, if you'll pardon this phrase, labor of them, as Van Bebber films it all, that somehow translates into a horror that is far less distancing than you might expect. The actors playing the victims rarely have a chance to act anything other than shrieking terror before they're each reduced to an object whose purpose, for those present, is to have knives stuck into it. There is a fever to the perpetrators, and Van Bebber plays it up with shots of Pitman's Watson as the Devil, and weirdly effective cuts to Orr and Maureen Allisse as Sadie Atkins, grinning like funhouse clowns, but Van Bebber portrays that fever as an occasionally tiring struggle, as in two moments where Watson is shown leaping on barely living victims so that he may deliver another couple dozen wounds. It begins to look as though he is, in his mind, doing nothing more significant than hammering nails. 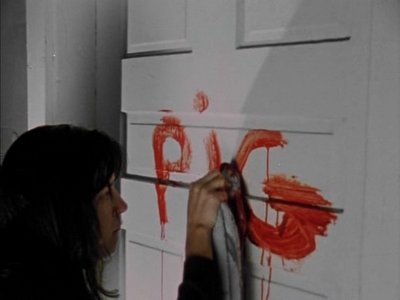 The murders become many things under Van Bebber's lens, many of them expected and natural, even hoped for -- reacting with horror to this material is, I'd say, a thing to be desired -- but as the majority of this curiously structured film (to avoid complicating this post, I'll simplify my description and just say it's set up as a fake documentary) is told from within the Manson family, I never lost sight of the fact that, to Watson and the others, this was a task to be completed, at the command of Charles Manson. The murder of Rosemary LaBianca is grotesquely drawn out, but the power of it comes from the fact that for much of it she is lying face down and motionless while her killers just relentlessly stab her in the back. The total lack of empathy expressed by the characters of Krenwinkle and Atkins and Watson in the film, and embodied to the hilt by the actual murderers, could not be more chillingly illustrated than by the depiction of Rosemary LaBianca as little more than a bloody dress, with apparently something inside of it. When Krenwinkle is shown stabbing and stabbing and stabbing her, and then pausing as if to leave the room, only to turn back and stab her a few more times, it's as if she's adding a few more touches, sanding down a corner or smoothing out a wrinkle. 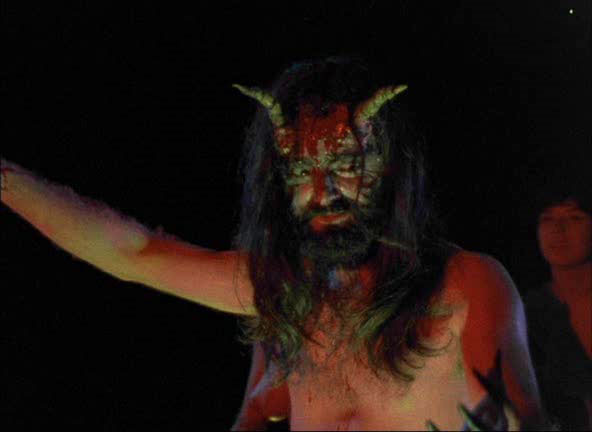 How is it that this manages to imbue the fictional representations of the Manson cult's victims with humanity? I'd say it must be because Van Bebber successfully shows that the dehumanizing of them by their butchers was so complete. These are not murders as most filmgoers have been conditioned to expect to see them dramatized. There is little time to beg or scream, and in fact some of the victims could reasonably be assumed to be dead less than halfway through the attacks, though the murdering of them still goes on. The freedom from empathy experienced by the Manson cult is total, so as an audience member it is perhaps natural for a human being watching The Manson Family to home in on the only other human beings on display. I'm perhaps grasping for an a way to explain how this extreme level of film violence can have a humanizing effect, but that is, somehow, what Van Bebber achieves here.

Van Bebber has his limits, though. The murder of the eight-months-pregnant Sharon Tate is the least graphic one in the film, by a huge degree. Even Van Bebber is capable of flinching.
Posted by bill r. at 9:42 PM

When I first saw Bebber's film "Deadbeat at Dawn," I thought here is a man who has a million dollar mind that can work on a very low budget. He definitely shows his stuff off in this film. As a fan of true crime and horror movies, this was an interesting treat to see.