.
Good afternoon. You are all aware, I assume, that this blog is written and maintained by the author of such accomplished works as the horror novel This and its sequel These, as well as numerous monologues such as How Much is a Hero?, among many other works. If you’re not aware of that, well, I am. Knowing this as you do, your civilian mind might figure that this is plenty, that no mind could be so creative and perceptive of the world around him as to ever wish to – never mind be capable of doing so! – branch out yet further from this already full and foliose artistic tree. I excuse your ignorance, because what would you know of the creative life? But know this now: stagnation for one such as myself is akin to death. To avoid this, I am forever exploring new avenues, or “branches”, of the aforementioned tree, or “city”; I constantly plumb the depths, or “roots”, of my demiurgic well, or “tree”.
.
With this in mind, I would like to now announce a new literary project. Although, to be honest, it’s not really “new”. You may be aware of a new genre, these “mash-ups”, I suppose you would call them, wherein a contemporary writer takes a classic piece of fiction and, while keeping said classic intact, adds new characters and narrative possibilities that result in, for instance, Pride and Prejudice and Zombies. Naturally, everyone has collectively agreed that this is a marvelous idea, and I am no different. In fact, I am so not different that I’ve been doing this for years, for positively ages, long before it became the going thing. My feverish pen has improved upon any number of classics, so that the world can now enjoy The Great Gatsby and Dragons, The Time Machine and Manticores, Imaginative Qualities of Actual Things and Ghouls, La Dispiration and Extraterrestrials, Frankenstein and Ghosts, The Best American Short Stories of the Century and Spiders, and so on. As you can see, my hands have hardly been idle! Granted, not all of these have been published, because I’ve learned that the original novel’s copyright having transferred to the public domain is essential, but rest assured that they’ve all been written and are simply awaiting that great day. Those works which I’ve transformed that are in the public domain are, I promise you, “making the rounds”.
.
In the meantime, I’ve been hard at work on my next literary improvement, and just recently completed same. Once known by the fairly pedestrian title Moby-Dick or, The Whale, Herman Melville’s masterpiece of madness, obsession, and cosmic rage will soon be available as Moby-Dick or, The Whale and Wolfmen. Again, the idea here is to take the original text and present it in full, but interspersed throughout will be new material, written by me, which will provide new twists on favorite characters, such as the whale, and the guy who hunts the whale. But it's not all about looking at the characters through a newly-ground lens -- it's also about adding fresh occult subplots about hunting wolfmen. Moby-Dick is in need of a punch-up, is my point, some new juice, some zaz, which will bring young readers and modernize Melville's themes. Genre fiction, specifically wolfman fiction, has a tendency to upend our beliefs, to subvert what we think we know, to teach us truths we thought hidden. This never even occurred to Herman Melville, but, fortunately for him, it did to me.
.
I suppose at this point some excerpts would be in order, to whet the appetite of my readers (or wet their appetites, if you will, because of the ocean). So let's begin at the beginning, and please note how seamlessly I'm able to incorporate my own work into Melville's.
. 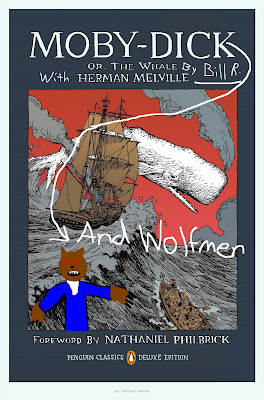 Dammit, I was soooo close to finishing my Moby Dick/Werewolf mash-up, too!!

Though I had a little twist that I thought was clever. In my version, when Ahab is thrown into the water with Moby Dick and the Werewolf pirates his legs turn into fins! He's a merman all along!!

Well, I guess I can finish Vampire Metamorphosis now.

He was a stowaway, Joe, not a pirate. Come on.

Other than that, your merman idea is not without merit. It's just that I think it might be more fittingly applied to something by Joseph Conrad.

Fancy the content I have seen so far and I am your regular reader of your blog.

I am very much interested in adding http://wwwbillblog.blogspot.com/ in my blog http://the-american-history.blogspot.com/.

I am pleased to see my blog in your blog list.

Hope to see a positive reply.

Thanks for visiting my blog as well !

Waiting for your reply friend !!!!!

Can't wait to read Philbrick's foreword. No one knows more about whales and wolfmen than he. Well, maybe you, but right after you, Philbrick!

If Harold Bloom hadn't already invented the word "seamless" for "Hamlet and Hobgoblins", he would undoubtedly have invented it for this.

Greg - Philbrick knows his shit. I won't pretend to think that I don't give him a run for his money, but when it comes to the point at which whales and wolfmen overlap, the guy's pretty sharp.

Harold - I wonder if you are indeed Mr. Bloom himself. Either way, I thank you, kind sir. But I'd care a lot about your comment if you really were Harold Bloom. If you're not, then no offense.

Ah, sweet mystery of life--some things are better left unknown. But it is well known that Harold Bloom likes to refer to himself in the third person. Notice that, out of modesty, all his book jackets have "by Harold Bloom" written on them, rather than "by Me".

I like the idea of taking Ayn Rand's Fountainhead and setting it the strange dystopian future of "Terminator 4." Maybe. I really like this post and it has just the right hint of humor and sarcasm. Personally, I've been getting into novels with a bit more ideas than just zombified themes. I checked out Kris Sedersten's Mojo, which deals more with the paranormal. It's actually a lot creepier than the undead. Keep up the great posts!

Though odds are, Dracula will catch him. He's an undead supernatural vampire, you know.

Shit, I hope I didn't spoil it.

"I like the idea of taking Ayn Rand's Fountainhead and setting it the strange dystopian future of Terminator 4."

I think I'd prefer it be in a Spaghetti Apocalypse like my Enzo G. Castellari's The New Barbarians, but that may just be me.

The Whale and the Wolf Men, eh? Sounds like a riot. Now if I could just figure out why none of the stores around me seem to carry it...

Wanted to let you know that I included a link to this post in my second "issue" of Spatter Analysis.