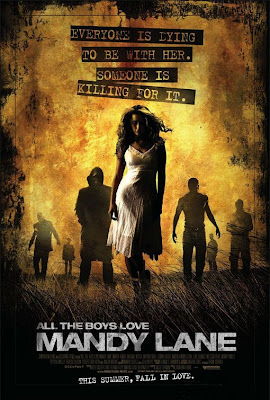 .
I continue to find it very peculiar that Jonathan Levine and Jacob Forman's All the Boys Love Mandy Lane has still not only not been released to theaters in the US, but hasn't even been given a token DVD release. The story behind this is, at least as I understand it, not terribly compelling: using the box office failure of Grindhouse as their primary learning tool, the Weinstein brothers unloaded the much-less-wonky-than-Grindhouse slasher film onto another distribution company, which promptly went bankrupt. And so All the Boys Love Mandy Lane has languished, first as a much-whispered about horror film, of the "I got to see this, but you can't!" sort, talked up by those who'd caught it at one or another film festival, and more recently as a movie everybody has forgotten about because most people aren't easily able to see the damn thing. Of all the kinds of word-of-mouth that can build hype, the highly positive kind that nevertheless can't do anybody any good is by far the most powerful, but that power is finite.
.
Talking about All the Boys Love Mandy Lane now, it's hard to know if one should even bother avoiding spoiler territory, and if one doesn't bother, if one should then bother adding a spoiler warning. It's not impossible to see All the Boys Love Mandy Lane, and if you already own a region-free DVD player it's not even expensive. But you do have to already own that particular kind of DVD player, and you have to be willing to buy All the Boys Love Mandy Lane just because you want to see it for the first time. You really have to want it, in other words. With no offense intended towards the film, how many people feel enough residual hype now, four years later, to do that?
.
At least one, since that's how I finally saw it, which I've now done twice. The second time was today, and the film holds up very nicely. Which is the thing about All the Boys Love Mandy Lane: it is a good movie, almost undeniably solid, and perhaps insidiously powerful -- I say "insidiously" because it plays, with great ease, as a straight-ahead slasher film. But it has a brain, and even a heart, though not an especially warming one. Directed by Levine and written by Forman, All the Boys Love Mandy Lane is about the titular female, who is of high school age, and how all the boys love her. Or rather, want to have sex with her. Mandy (played by Amber Heard, who is well cast for all sorts of reasons) is almost the typical perfect girl -- gorgeous, blonde, sweet, humble, completely without affectation and without a mean bone in her body. And she's chaste, too, which is why all the boys want to have sex with her, in particular -- "I claim this land for Poland", and so forth -- and why she's invited to a weekend getaway by a group of friends, one of whom has a farm, or rather his parents do, said parents being out of town. So, drink, drugs, sex. She agrees to go, and I'll leave it up to you to guess if the mysterious killer who shows up on the first night kills them one by one, or all at once.
.

Okay, it's one by one -- so there's your spoiler. What's interesting about All the Boys Love Mandy Lane is that the smart-ass, off-hand cruelty that is a staple of pretty much all movies about teenagers, not just slasher movies about teenagers, is not merely there, which is usually the case. As the film builds, it eventually becomes clear that this stuff, while not hammered on gratuitously, is sort of what the film is all about. The whole film is practically told in miniature in the first chunk of the film -- not quite a prologue, but near enough -- which involves a pool party, a jock who wishes most ardently to get all up in Mandy Lane, Mandy's quiet, nerdish friend Emmett (Michael Welch), and a terrible accident. Simply saying that I'm going to tread lightly here is already treading more heavily than I probably should, but in order to say anything about this scene, and really the film, I should note that All the Boys Love Mandy Lane, and primarily this scene, does benefit from repeated viewings. There also shouldn't necessarily be extra points handed out if you guess early who the mysterious, lurking killer is, not least because the film reveals his identity well before the end. And when you see what he's wearing, you might be reminded of certain violent high school stories you've heard about in the news, and how teenagers can be assholes, but also this hardly justifies certain actions, and so forth.
.
Again, though, none of this is underlined very strongly, and this is to the film's credit. Neither Levine nor Forman are so stupid as to neglect their obligation to view, and portray, their story's victims as human beings, no matter how unlikable they may otherwise be. One guy, Jake, played by Luke Grimes, comes off as a right bastard, but before his worst qualities come out he's also shown taking some particularly bad verbal abuse -- bad for a teenage boy, anyway -- with both barrels. And the resident "mean girl", Chloe, played by Whitney Able, is usually seen dishing it out, but has a sad, lonely moment that proves she most definitely cannot take it. It's all surprisingly humane, something that can't often be said of slasher films.
.
Jonathan Levine -- who has not returned to the genre since this film, which is pretty atypical of young modern filmmakers who get their start in horror -- landed on a nice visual style here, focusing first on a way to film Mandy Lane, and then radiating out from there. Heard as Lane is photographed in perpetual sunshine, or so it seems -- even when it's night, she still seems to be walking through a summer day. The rest of the film carries that same country summer feel, more so than any of its genre predecessors that chose roughly similar settings (I'm distinguishing the deceptively welcoming climate of this film from the also summery Texas Chainsaw Massacre, whose sun does not warm but rather bakes the dirt all to hell), and certain moments of daylit horror have a bright shimmer that's unnerving in its incongruity.
.
That being said, I'm not sure I can say that All the Boys Love Mandy Lane built up a great sense of terror or dread, at least not in me -- at its best, the film felt more like a sad, brutal, moral disaster. It would feel like that even more often than it does if it wasn't for the fact that Levine and Forman apparently felt the need to undercut things a little bit too much, and a little bit too often, with needless, and ostensibly clever, touches. And there's that ending, which even threatens to undercut how we got where we got in the story, but watching it again today I'm not sure that's entirely fair. In one obvious sense, and from one important character's not insignificant point of view, the ending changes absolutely nothing. What the ending does do is cast that beginning section into a new light, a potentially interesting one, and a pretty dreadful one.
.
Levine's final stylistic touch is to throw All the Boys Love Mandy Lane back to the grindhouse (I don't know, maybe the Weinsteins had a point after all), which is the thing to do these days, but I have to say he makes it work. He throws it even further back by playing us out with the song from which this post takes its title. It's one of those clever touches, but it works, too.
.

I was not aware that Mandy Lane was unreleased in the US. I live in Mexico and saw it movie theaters last year as I recall. Also, it can be found in any video rental place. I found the movie to have a certain dream like quality to the film that set it apart from other teen slasher films.

But I agree, there is a dreaminess to the film, particularly when Levine wants to evoke a certain summer freedom with the characters, doomed though it may be.