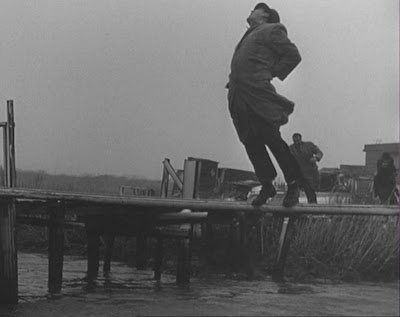 Guess what I just did? I missed my own blog's two-year anniversary, which was yesterday. For some reason, I thought the anniversary was on the 21st, and my plan had been to use the opportunity to write-up Allen Barron's Blast of Silence, as that's the film that gave this blog its name. Obviously, I could still do that, but the frickin' anniversary was yesterday, and that realization has made me feel all out sorts. I know -- boo hoo. But I honestly like kind of a punk now, and I don't want to half-ass a Blast of Silence review just so I can say I was only one day late.

So what do I do now? I don't know. You're supposed to do something special for your blog anniversary -- I think the second is the "sarcasm" anniversary -- and I completely spaced. And my ambitions were so out-sized, too: Blast of Silence, pizza, Citizen Kane-esque dancing girls.

Welp. Happy anniversary to me, I guess. It might well have been interesting, had I remembered.

UPDATE: Ah, I'll probably still do it. Write up Blast of Silence, that is. Look for it tomorrow, or something.
Posted by bill r. at 2:44 PM

I watched Blast of Silence not too long ago and was like "I knew I'd heard that before!" I look forward to your thoughts.

Thanks, Neil! Boy, I screwed the pooch on this one, but still, I'll write something up soon.

You slap-happy son of a gun! Who cares?! Happy anniversary anyway!

Thanks, Dennis! Maybe I should just pop in INGLOURIOUS BASTERDS and let it wash away my worries.

Well, happy blog-o-versary. And I remember when you were but a wee commenter on GK's site...

Wash away, baby. Any reason is a good one to see IB again. I've been kinda pining for it a lot myself lately. It was exactly a year ago today, after all..

Tony - Oh, I was a lowly commenter all over the place! Glenn, Dennis, Greg, and a host of others are to blame for my expanded presence.

Ivan - Why don't you have the DVD? Did you forget they had those? That's the only excuse I can think of.

Dennis - Well, I ended up not watching it. Today has been "music day", much to my surprise.

Was the 20th really the release date? I think we should push for it to become a national holiday, myself.

Adam - Thanks! And "feledlex" sounds like a drug in a futuristic cop movie. Like, "We got word that there's a new drug out there, called feledlex. The street name is 'moondust'." That sort of thing.

Yeah, what 王辛江淑萍康 said and then some. Happy Two Year Anniversary, Bill. There really is no one quite like you. Well, except for Will. But he isn't 7/8 the writer you are.

Thank you, Arbogast. I truly appreciate it.

Congrats on two years. Looking forward to the Blast of Silence review. It's a great film; one of my favourites.

Sorry I missed this but then, so did you apparently. Anyway, offline all weekend except for a quick moment of hitting the "publish" button.

I feel it can't be two years, can it? It feels like yesterday we were going over the design and banner and stuff and setting it all up. Now, of course, blogger has all that 'design' shit in the menu so you can change it up yourself, if you ever want to.

"Thanks, Greg! Good to hear from one of my first ever online friends in the movie blogging world, one who, in fact, even helped me set up this blog. Really, thanks a lot!"

You suck at responding to comments.

This is the first time I've been near a computer all day!! I had stupid training and stupid testing, and then I had to frickin' walk for frickin' ever just to get to a frickin' computer! But I'm here now, so thank you Greg for congratulating me four days late on my anniversary! THANK YOU SOOOO MUCH!!

You are most welcome.

Two years? Guess I've got a lot of archives to read through.