A Place Behind God's Back 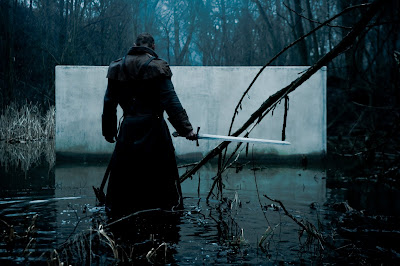 In 1595, a long war between Sweden-Finland and Russia has ended. A contingent of Russian soldiers is journeying up north, through unexplored and unportioned land. With them are two Finnish soldiers, working for the Swedish king, to help the two kingdoms parcel out this new land and establish post-war borders. Each side would like as much land for their own country as they can get away with.
.
Such is the set-up for director Antti-Jussi Annila and writer Liro Küttner's unusual 2008 horror film Sauna. At the center of the film are the two Finnish soldiers, brothers named Eerik (Ville Virtanen) and Knut (Tommi Eronen). The film drops us into the middle of the story's pivotal event, as we're introduced to Eerik as he is murdering a farmer for, he claims, betraying Sweden by withholding supplies. The murder is brutal, and Knut witnesses it, entering the farmer's home after, we learn, locking the victim's daughter in the cellar. Why did he do this? Why did Eerik kill the farmer? We know what both of their stated reasons are -- Knut claims to have been protecting the girl from his brother -- but Annila and Küttner don't let us come to know either man, or either victim, before it's all over. What we learn in subsequent flashbacks, to what led to the murder, alleviates our curiosity only slightly. And what could the reason possibly be for Eerik, after promising his brother that the girl will be released from the cellar, to leave her locked away, only revealing the truth to Knut days later?
. 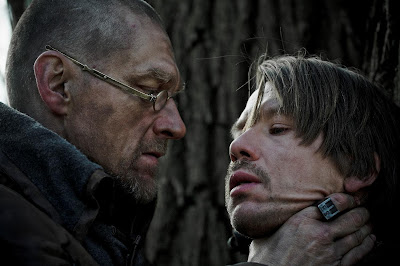 War, would seem to be the filmmakers' answer. Sauna has a disconcerting tendency, in its early-going, to appear simple-minded and pleased with its own pseudo-profundity. After killing the farmer, Eerik whirls on Knut and says, "This is what happens in peacetime!" Yes, well. Thankfully, Annila and Küttner rather quickly realize what actually interests them, and Sauna becomes a progressively stranger take on the idea that the only terminus for a soul stained with guilt is horror. Unending horror, even, unless you're careful. And even then...
.
The Russians and the two Finns eventually find a village in the middle of a black swamp. Knut has by this time seen, or believes he's seen, a mud-spattered girl -- the farmer's daughter? -- appearing unexpectedly among the quagmire and barren, branchless trees along their journey, and he's professed a disbelief at his brother's recent behavior. Eerik, meanwhile, admits only to wanting to protect his brother and carve out a greater piece of land for Sweden. He's killed, he says, 73 people over the course of the war, including the farmer. He considers his victims "useless". But this village, we'll soon discover, has a population of exactly 73 people. Of these 73, only one is a child. And this group of 73 did not even develop the village themselves, but rather found it in their travels. Whoever did originally live here, they based their existence around the sauna, a squat white building stuck in the middle of an expanse of black water. In Finland, Eerik says, both the newly born and the newly dead are taken to saunas, to wash away the past.
.

Both Ville Virtanen and Tommi Eronen are wonderfully craggy and haunted as the brothers, with Virtanen resembling a young Max von Sydow at his most fit-to-bust, and Eronen a young Gary Oldman at his most despairing. Annila paints his film in blacks and whites and browns, because what other colors could he use? Even the blood, when it flows here and there throughout, and begins to pour at the end, comes out a corrupt black, except when it mixes with a purifying stream. The whole film, in fact, slowly and subtly becomes an attempt to dispense with corruption, as first Knut, and then Eerik, seek absolution, and whatever punishment is connected with it, by entering the mysterious and dreadful sauna. What follows, and surrounds, this decision -- and whose decision it was is, I think, unclear -- is horror of a particularly cutting and bizarre sort, the supernatural revealing its full form without revealing what it is, or why it's here, or even what it wants.
.
We know what the brothers want, but their simple desire for cleansing not only comes with an enormous price, but may in fact be a red herring. There is a lot at play in Sauna: not just guilt and redemption, but questions of war, of land, of family. The sexuality of one of the Russian soldiers comes into play, as well as, by extension, the sexuality of Knut. The one child in the village is a girl who disguises herself as a boy. Eerik has a wound on one hand which may remind you of the wounds suffered by a certain well-known historical and religious figure. All of these themes and story elements bounce off each other, and connect, or don't, in tight but perplexing 80-some minute film that contains in its final moments one of the most haunting and chillingly imaginative horror images I've seen quite a while, outside of the films of Guillermo del Toro.
. 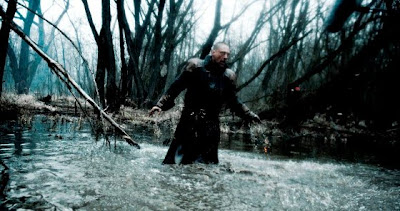 Regardless of the possibility that the source of the film's horror may have no connection, and may possess an animal indifference to, the jeopardized souls of Eerik and Knut, the fact remains that their fates are tied to the quest for redemption that every honest person spends their life trying to complete, in whatever small way. Most people don't have to journey that far, and many others think they have to travel further than they really do. Others, like Eerik and Knut, have a long way to go, an eternity, and though it may feel like a positive step, the events of Sauna would suggest that merely wanting redemption isn't enough. It depends on what you need to redeem, and where you seek it out. If you look for it in the wrong place, you may bring down more than just yourself.
Posted by bill r. at 9:50 PM

Maybe it's because of all the talk over at Greg's blog, but am I right in assuming that this movie has a Bergmanesque feel to it?

Your piece is evocative of THE SEVENTH SEAL and THE VIRGIN SPRING.

Interesting comparisons. It also felt a little like Stalker to me at times.

However, I was mostly disappointed by the visual style (esp. the occasional spot of intrusively wobbly camerawork, shaky-cam's only slightly less obnoxious little brother) and the sloppy, rushed-feeling presentation of some of the horror scenes.

If nothing else, this movie could have been a haunting visual marvel surpassing anything Del Toro has done, but that requires not only an eye for intriguing visuals but also the willingness to linger at times, whether to leave a stronger impression or simply to vary the rhythm, to keep the watcher guessing, and the makers of this movie didn't seem to have enough of either to make for something truly memorable.

Tony, John's right - it very much has a STALKER feel to it, and I meant to mention that, didn't, and then couldn't find my way to cram it in after a proof-read. But certain shots of the sauna itself could have come directly from STALKER.

John - Well, the film ain't perfect. I wasn't crazy about the occasional jittery camera either, but the film's last half hour, I think, makes it. I don't know how much longer the horror images in that section should have been lingered over. Maybe a bit more would have made it all even more effective, but at the end I didn't find myself wishing for that. The film's primary horror image (which, by the way, pops right up if you search for images of SAUNA on Google, so I recommend not doing that if you haven't seen the film) carries such an impact as it stands that I don't feel like I'd want to mess with that.

If you mean lingering at other times, well, maybe. I can't say it felt that way as I watched it, however.

It has been a while since I saw Sauna, and I probably should watch it again before saying anything else about it. But while I liked it well enough, I guess I just felt its strengths, it's enigmatic qualities, that you addressed above, Bill, could have been better realized.

Not that I need gore or violence lingered on, but maybe some of the eerier images could have been better visualized or built up towards more suspensefully. All the action inside the actual sauna, as far as I can remember, was pretty much a blur, and the choppy editing and closeup zig-zagging camerawork didn't much help matters. I'm not saying that kind of thing can't be done with some success, just that it very rarely seems to be, and without a solid sense of place and threat and anticipatory dread it usually ends up looking pretty anticlimactic.

But like I said, it has been a while, so I'm not completely certain my recollections of this movie are in any way accurate. Indeed it's very possible that I'm thinking of some piece of Euro crap I watched a month ago with no relation to Sauna at all, like Cold Prey 2 or something. So take all the with an extra few grains of salt, maybe, just to be safe.

Indeed it's very possible that I'm thinking of some piece of Euro crap I watched a month ago with no relation to Sauna at all, like Cold Prey 2 or something...

With all respect, I think you might be. In the big scene in the sauna, it's true that you don't know quite what's going on, but not because the camera is whizzing around. It's very steady, in fact, even stationary. What you can't see is hidden due to framing, and that's as it should be. If you saw everything, it would be less effective and mysterious.

The camera does jitter now and then, but that's hardly the film's style. It's a choice made for a particular moment, but otherwise camera movement is pretty restrained.