Readers May Find Much of the Following Tedious 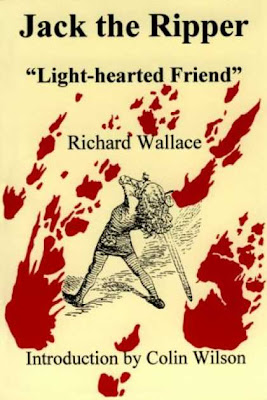 I don't know how many of you are aware of this bit of fringe culture ephemera, but in 1996, a man named Richard Wallace published a book called Jack the Ripper: Light-Hearted Friend, in which he proposed that the identity of the most famous serial killer in world history was none other than Charles Lutwidge Dodgson, better known by his pen name, Lewis Carroll, author of, among much else, Alice's Adventures in Wonderland. I stumbled across this book in 1999, while working in a bookstore, and I bought it very soon thereafter, because how could I not? I bought the book not with the feeling that this Wallace person might be on to something, but because I figured this simply must be the most ludicrous "solution" to the Ripper murders that anyone had ever had the balls to make public.
.
And as far as I know, it is. I might as well admit right off the bat that I haven't read Wallace's book in its entirety -- I don't know about you, but while my superficial interest in the scribblings of the mentally, yet enthusiastically, imbalanced seems to be limitless, my patience when it comes to actually reading the stuff is extremely thin. From what I can tell, the vast majority, by which I mean all, of Wallace's so-called evidence takes the form of anagrams, composed from Carroll's own writing. So, if you take, as Wallace did, the first verse of "Jabberwocky", from Through the Looking-Glass:
Twas brillig, and the slithy toves
Did gyre and gimble in the wabe:
All mimsy were the borogoves,
And the mome raths outgrabe.
...and put all the letters in a blender, mash down all the buttons at once, and then pour it all out on the table, you might end up with:
Bet I beat my glands til,
With hand-sword I slay the evil gender.
A slimey theme; borrow gloves,
And masturbate the hog more!
Which stands to reason, because about two-thirds of the alphabet is represented in that original verse, so you can make it say just about anything you want it to, provided you're not looking to talk about xylophones, zebras or quetzalcoatls. So, QED: Lewis Carroll was Jack the Ripper. 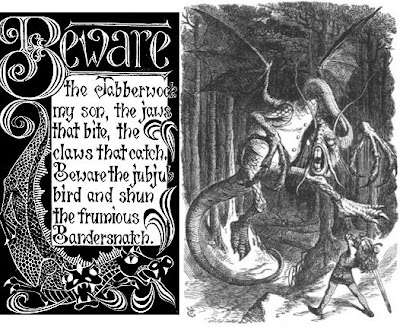 That's what the book is -- that and a lot of psychoanalysis of both Dodgson/Carroll, and the anagrams Wallace claims to have solved. Get a copy, flip through it, or read the whole damn thing, and you'll see. Fascinatingly absurd, but also tedious. However, what I did read clean through just recently (and for the first time, I'm embarrassed to admit) was both Alice's Adventures in Wonderland and Through the Looking-Glass. And quite delightful they both were, though Through the Looking-Glass was a good deal stranger and more uneasy than its predecessor. Finishing that second book, I couldn't help but think about Wallace, and what he must have made of the ending. Briefly, Alice has been crowned queen, and the celebration goes entirely bonkers, with the White Queen and the Red Queen and everybody else persisting in the illogical nonsense that has driven Alice a little bit further around the bend than her adventures in Wonderland ever did. Not being able to put up with any more of it, Alice loses her shit, knocks over tables and dishes, and grabs the Red Queen, shaking her, and insisting that she is really a kitten. Which she is, because this has all been a dream, and Alice wakes up shaking not the Red Queen, but her cat.

But Alice is blaming the Red Queen! The Red Queen! Red like blood! Plus, she's blaming the Red Queen, essentially, for turning everything insane. And what's another word for cat? Pussy. And you take my word for it when I say that Wallace will stop at nothing to find vagina imagery in his anagrams. Both the Alice books were written before the Ripper murders, but Wallace uses, for instance, his "Jabberwocky" anagrams as evidence that Carroll was predicting the murders, or at least the further disassembling of his psyche that would lead to them. Surely Wallace could have a field day with this stuff ("queen", too, since he seems to believe that Carroll had homosexual tendencies).
When I finished Through the Looking-Glass, I pulled down my copy of Wallace's book, and began scanning it for references to this ending. But, from what I can tell, if my skimming and the book's index are any indication, Through the Looking-Glass barely gets a mention, outside of "Jabberwocky". The Queen of Hearts from Alice's Adventures in Wonderland, who is basically an earlier version of the Red Queen, gets far more of Wallace's ink (she was Carroll's mother, don't you know), but "Queen of Hearts" is far less evocative in this context than the "Red Queen". Are you seriously telling me, Richard Wallace, that you could do nothing with Alice giving the third degree to her pussy because she thinks it's a maniacal blood-red queen? This is your bread and butter, you big goofy lunatic! I mean, okay, if you're trying to find incriminating metaphors by way of anagrams, you're work has already pretty much been done for you, and your obsessive need to rearrange the letters of poems, to make them spell out brand new things about masturbation and knives, probably didn't find much of an outlet here. All the words you'd need are already spelled out correctly. But still! It doesn't have to be anagrams, does it!? If what you really want is to waste your time finding dark meanings in a piece of literature the entire purpose of which is to be nonsense (and here I can't entirely blame you, because there's some weird stuff in these books, particularly Through the Looking-Glass), then shouldn't you be willing to latch on to whatever works? What is it with you and anagrams, anyway?
You know what? I'm starting to think that maybe Lewis Carroll wasn't Jack the Ripper after all!
Posted by bill r. at 11:03 AM

According to Wikipedia, the first three sentences of this book read

This is my story of Jack the Ripper, the man behind Britain's worst unsolved murders. It is a story that points to the unlikeliest of suspects: a man who wrote children's stories. That man is Charles Dodgson, better known as Lewis Carroll, author of such beloved books as Alice in Wonderland.

which is an anagram of

The truth is this: I, Richard Wallace, stabbed and killed a muted Nicole Brown in cold blood, severing her throat with my trusty shiv's strokes. I set up Orenthal James Simpson, who is utterly innocent of this murder. P.S. I also wrote Shakespeare's sonnets, and a lot of Francis Bacon's works too.

And Nicole Brown was murdered, Jack the Ripper was a murderer...

Do you need a road map? RICHARD WALLACE IS JACK THE RIPPER!!!

Yeah, I saw that. It's really creepy, isn't it? Wallace's whole book is a coded confession of his vast history of time-hopping murder!

I heard the third chapter is just a big anagram for how he built his time machine.

If you drop some of the letters (which Wallace actually does with some of his anagrams), "light-hearted friend" turns into "I farted light". Jesus, I'm getting so creeped out by this...

"I farted light" shall be my new motto. I will however express it as "light-hearted friend".

Do you have any idea what you've done? Since my wife is pretty up on her Ripperology -- not to mention her Carrolliana -- I hadda go and ask her if she'd ever heard of Wallace's book. Which she hadn't, but when I told her the premise, she lit up like Rockefeller Center and said "Happy birthday to me."

It would be useless to protest that improving Wallace's Amazon.com ratings wasn't your intent. Unless it was, considering that "The Kind of Face You Hate" is an anagram for "I fake the fad tune. Yo-ho." That damning evidence may be all the proof I need.

Tom - Tell that wife of yours, if she hasn't already discovered this for herself, that Wallace wrote an earlier psycho-biography (all of that should probably be in quotes) of Carroll called THE AGONY OF LEWIS CARROLL. It was his, ahm, work on that book that led him to think, "Hey, wait a minute!", and this Ripper/Carroll book was born.

As for the rest of it, well, I'm sorry. Or should I say "a whiffletree mirrors lost toys". If you know what I mean.

I also heard Jane Austen was Spring-Heel Jack, but then her ankles gave out, and passed the torch on to Charlotte Bronte.

Not so great now, are you, Jane Austen, you weak-ankled old lady!

I did not find much of the following ted ... zzzzzzzzzzz

I was, am, and will continue to be utterly convinced. I wish more authors did the kind of research legwork that Wallace does. He is the wind beneath my wings.

Rick, wake up. You're drooling.

Greg - You're not alone! You're MOSTLY alone, but not entirely. Check out the Amazon reviews. One or two people think that this Wallace character has gotten a raw deal.

"I farted light" shall be my new motto. I will however express it as "light-hearted friend".

Man! that was funny. I need to read this book.. now!