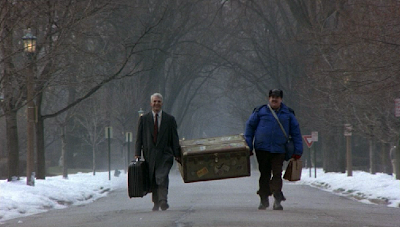 It would be a lie to claim that the films of John Hughes meant a great deal to me when I was growing up, and it would also be a lie to say that I even liked all that many of them. But the above image, from one of maybe two Hughes films I genuinely do love (I also really like Uncle Buck), is a real winner, as far as I'm concerned.

I honestly don't give a damn if the ending of Planes, Trains & Automobiles is thought by many to be manipulative, because of course it is. What matters is if that manipulation works, and for me it does. Up to this point, the film has been a pretty damn funny buddy/odd couple comedy, about a couple of guys named Neal and Del (Steve Martin and John Candy) plowing through a series of bad breaks in order to get home in time for Thanksgiving with their families. The journey has also been fairly uncomfortable -- due in large part to the brilliant work by Martin and Candy -- because Neal has found it increasingly difficult to mask his annoyance, and even dislike, for Del. But, as with most such movies, the two find friendship, and so on, but then we learn the truth about Del, which is that his wife, about whom he's spoken very lovingly throughout the film, passed away some years ago. Neal invites Del to share Thanksgiving with his family, which leads us to the above image.
.
Nobody reading this is going to be shocked by this news, but here it is anyway: if you've ever had an emotional reaction while watching a film, and that emotion matches the intent of the filmmaker, you've been manipulated. Which doesn't mean the filmmaker's intent wasn't sincere, and Planes, Trains & Automobiles has always struck me as absolutely genuine. It has a heart, and it earns that ending, where we discover that the movie finally ends up being about a guy who is socially very awkward, and finds it very difficult to make friends. He had one great friend, a situation he believes he lucked into, and now she's gone, and he's back to screwing things up by trying too hard. And look at John Candy's face in the scene where Steve Martin snaps and really lays into him. It's rough the first time you see it, and heartbreaking every time after that. It's great stuff from Candy, but Hughes is the filmmaker here. Extra points for getting there by taking a sharp right turn from the comedy of what Martin is actually saying to him (favorite line from that scene: "How would you like a mouthful of teeth!?").
.
Oh, and the movie's hilarious, too. Hughes made comedies, don't you know. You might get a different impression of the guy from reading this post, but that's what he did. And that reminds me of something you should probably know about Neal: Larry Bird doesn't do as much ball-handling in a night as that guy does in an hour.
.
Now take this quarter, go downtown, and pay a rat to gnaw that thing off your face.
Posted by bill r. at 8:11 AM

You know, this may be one of the only Hughes films I have NEVER seen. Will have rectify that, as I only ever hear good things about it.

Oops...I just kind of gave away the ending to you.

Oops...I just kind of gave away the ending to you.

Not completely. You didn't mention the ninja attack as they ride in on the t-rex robots just as Steve Martin is about to kill the Dark Wizard. Oops. Sorry Wings.

That's okay. My brain is half-mush now, anyways, so we will see what I actually recall when I do watch the film!

The t-rex robots are kind of hard to forget.

Don't listen to him, Wings. There are no t-rex robots in the movie. Those are bronto-bots. Jesus, Greg. Those two dinosaurs can't be any different.

Anyway, I don't own a copy of this movie, and can't afford to buy any DVDs this weekend, so I hope Encore airs it this weekend, because now I want to watch it.

I'm happy to see you go to bat for Uncle Buck (I agree with you on PT & A as well... when John Candy says "I-I like me."??? Dude. Breaks my heart.), b/c I think that movie is liked, but kind of brushed aside as whatever film snooties don't like to take seriously.

I'll bet that the Coens got their bowling inspirations for The Big Lebowski from Uncle Buck, and I'll declare that the peformance by John Candy in that movie is friggin' amazing!

John Candy was always friggin' amazing. He really was. Look at those old SCTV shows. No one gave more complete performances, out of that entire incredible cast, than John Candy.

If that's a manipulative ending - and I guess it is - I'm willingly manipulated by it every time I see it. I've always really enjoyed this movie, and you do it fine justice here.