Yesterday, I watched Budd Boetticher's Ride Lonesome, which I'd had saved on my DVR for many months. This was my third Boetticher film in about a year, and, aside from a surprisingly lackluster climax (specifically, the shoot-out), it was really terrific, as each of the Boetticher films I've seen has been.

It stars, as per usual, Randolph Scott as a reserved, Gary Cooper-esque sort named Ben Brigade, this time on the hunt for a back-shooting outlaw named Billy John. Brigade finds Billy in the first couple of minutes of this 73 minute-long film (a not unusual running time for Boetticher), and from there Brigade is off, taking Billy to Santa Cruz to collect the bounty on the latter's head. Along the way, he meets up with two other outlaws (Pernell Roberts and James Coburn), who want in on the bounty, not for the money, but for the amnesty; Karen Steele as a woman whose husband, who ran a stagecoach depot in the middle of nowhere, has been killed by Indians; and Indians. And all the while, everyone has one eye on the lookout for Billy's brother, Frank (Lee Van Cleef), who might be more important to Brigade than Billy himself.
So that's the story, and a tight one it is. But the thing about Boetticher is that the characters in his films, especially his villains, acheive a level of reality rarely seen in films from his own era, let alone now. Randolph Scott played the hero in most of Boetticher's major films, and his motives are usually typical (by which I mean typically awesome) of Western heroes, but the villains have a great deal more shading that I'm used to seeing. Look at Roberts and Coburn in this film. They may not be villains, but they are antagonistic, yet they do what they do -- which includes threatening to take custody of Billy from Brigade by force -- because they want to start their lives over. 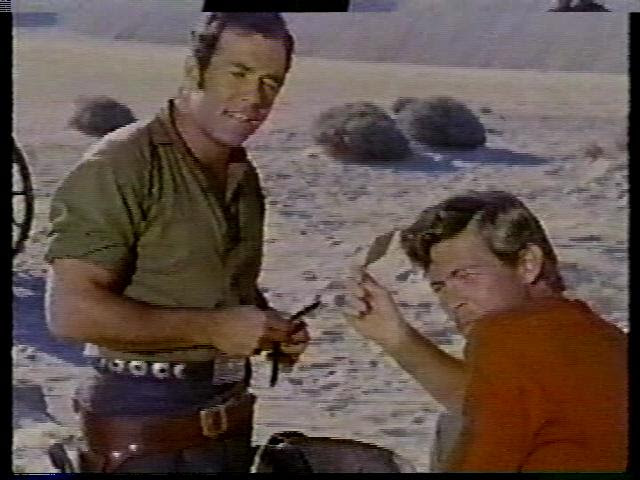 Or look at Lee Van Cleef. I won't give away his part of the story, but when he arrives, his history with Scott seems to both disgust and frighten him, but he won't apologize for it. He just can't seem to believe that the horrible thing he did so many years ago is coming back now to bite him in the ass. Maybe I'm reading to much into Van Cleef's face in this one scene, but I was struck how unlike your typical snivelling villain Frank was. He's still a horrible human being, but he's a recognizable horrible human being.

And it's the same with all the major supporting roles (well, to be honest, the male supporting roles) in all the Boetticher films I've seen: Roberts and Coburn, Lees Marvin and Van Cleef (the former in Seven Men from Now), and, especially, Henry Silva and the great Richard Boone in The Tall T. These are great, subtle performances, getting across a lot of character information in their share of the barely 70 minutes each of these films lasts.

The Tall T was based on an Elmore Leonard short story, but there's a Leonard feel to all of these films. Leonard at his best lets his characters reveal the subtleties of their personalities and motivations through their conversation. His villains are stupid, or they're smart, depending on what kind of person they are. They're doing the wrong things for the right reasons, or they're complete human trash. And the hero may know that the man he's facing down isn't an evil person, but he has to be stopped all the same. It's the same with Boetticher's heroes and villains. With the exception of Scott (and he may not even be an exception; I've only seen three of these so far), you can't assume too much about any of these guys. It all depends on what you learn about them as the film progresses.

And why aren't these films out in a handsome DVD box-set, like the one Val Lewton's horror films got some years back? They're crying out for it. Somebody make it happen. Anyway, my next Boetticher film (thank you, DVR and Turner Classic Movies) will be The Man from the Alamo, starring Glenn Ford this time, not Randolph Scott. I can't wait.
____________________________________________________
EDIT: I just realized that, in this post, I did something I hate: I never once mentioned the writer. I did mention that Elmore Leonard wrote the source material for The Tall T, but I never bothered to credit Burt Kennedy, the screenwriter for all three of the films I mention.

Well, let me do that now. Kennedy's scripts are marvelous. There's an individuality to all the of characters, but Kennedy never once relies on cheap phrases or colloquialisms to distinguish them. You don't identify James Coburn's Whit or Pernell Roberts's Boone because one always says "Well ain't that a kick in the pants!" and the other one doesn't. You identify them because they sound like themselves (and also because one is played by James Coburn and is named "Whit", while the other is played by Pernell Roberts and is named "Boone". Also, their shirts are different colors). I know, that sounds perilously close to mystical artsy horseshit, but that's because this particular skill is both rare and difficult to describe (for me it is, anyway).

Two of my favorite exchanges (lightly paraphrased in both cases):

And, okay, I can't remember exactly what Boone says after that, but I love that interruption from Whit. I don't really know if that was Kennedy, or Boetticher, or the actors, but it gave me that shiver of recognition, that realization that I'm hearing these guys talk the way actual people talk to each other.

MRS LANE: You don't seem like the kind of man who would hunt down another man for money.
BRIGADE: I am.

...is almost certainly all Kennedy, and it speaks for itself.
Posted by bill r. at 10:45 AM

Bill, it looks like someone heard your request, b/c a Boetticher box set is set to come out this November, at least according to this

Oh, excellent! It's about time (I checked Amazon, and it's listed there, too). And I think Seven Men from Now is already available as an individual DVD.

Well, what a great pairing ... Pernell Roberts and James Coburn, with the great Lee Van Cleef thrown in for good measure.

Who's Randolph Scott? Just kidding, I know who Randolph Scott was, what do you think I am, some kind of newbie, some kind of cinephyte? ha ha, get it? Cinephyte? I was just using ironic counterpoint, see, that compared to Coburn and Van Cleef, Scott is a boring stiff, sort of like, as you said, Gary Cooper, who couldn't act his way out of a paper bag.

Yeah, I actually sort of agree with you, Rick, about both Scott and Cooper. But to Scott's credit, my understanding is that he was a driving force in getting these films made, so he at least had good taste. And unlike the other characters in these films, his role was never very complicated (again, in the three I've seen), and he did fine.

But even so, when you watch Pernell Roberts in Ride Lonesome, or (especially) Henry Silva and Richard Boone in The Tall T, you can't help wishing that maybe someone like Jimmy Stewart had taken Scott's place.

As for Scott, yes, he's kind of stiff, but he has a dignity about him that reaches its peak in Ride the High Country. When you see that film, you realize just how good he's been in all his movies.

I really need to see Ride the High Country again. I saw it many, many years ago, and wasn't thrilled. I think the weight of expectation might have hurt the film in that case, and ever since I've been wanting to go back to it.

Lee Marvin is, indeed, great in Seven Men from Now. He plays such an unusual, fascinating villain in that one. And Marilyn, you need to see The Tall T. TCM and Encore Westerns show it pretty regularly.

I'll make a point of it.