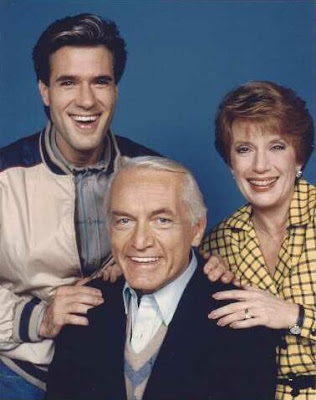 Another battle lost to the network suits occured in 1980, over at ABC. Dogs of War was the original title for Too Close for Comfort. This was the idea of the late Ted Knight, who viewed the series as his magnum opus. While he had nothing to do with the creation or writing of the show at any time during its run, he felt that calling it Dogs of War would convey a sense of doom and general existential malaise, which he felt was clearly a part of the show’s subtext.

“By definition, subtext is unspoken,” remembers Jm J. Bullock, who played “Monroe” on the series. “And Ted felt that, when he read those early scripts, there was a palpable sense of unease and dread that underlay all the surface shenanigans. In those early days, the show didn’t have any title at all, and Ted believed that by calling the show Dogs of War, that powerful, sub-textual darkness would be brought to the fore. So, for instance, there might be an episode where Ted’s character needed Monroe to help him catch a mouse in the attic, and while we’re up there he finds a bunch of old letters from his wife that seem to indicate she’d once had an affair. After a series of mix-ups, though, it turns out it was just notes for a novel she’d been writing years ago, and which, by the end of the show, Ted has encouraged her to finish. All very pleasant and fun, you know. But when the viewer connects all that fun to a show called Dogs of War, they start to think, ‘Hmm…Vietnam? Racism?’ That title made anything possible.”

To add the dark tone, Knight wanted the show’s opening credits to run accompanied by Barber’s Adagio for Strings. But the network nixed both the music and the title, in the latter case opting for the more generic Too Close for Comfort.

“Ted was crestfallen,” says Bullock. “And the gloating from Nancy Dussault, who’d never liked his ideas, didn’t help matters. When you watch the show now, you can see he’s just going through the motions. For my part, I wanted to do what I could to keep Ted’s vision alive with my performance, but looking back, without Dogs of War as the title, my shrill, circus-freak demeanor just doesn’t work.”

- from my upcoming book The Alienation of the Other or Benson?: Sitcom Title Changes and What They Say About America, coming soon from Penguin Press
Posted by bill r. at 10:15 AM

Did you know WELCOME BACK KOTTER was originally called MONSIEUR CARTER...LA MALAISE? And HAPPY DAYS was TRAPPED IN THE BOMB SHELTER? True stories, both.

So, I'm back and read your post above, the one on the crazy German filmmaker, and you seem kind of upset about this post not getting attention. Well, I am here to say this is a kick-ass piece of satire. Well done!

Ah, I just figured nobody thought it was that funny. But look, now I've forced you both to compliment me! SCORE!

Forced compliments are the best!