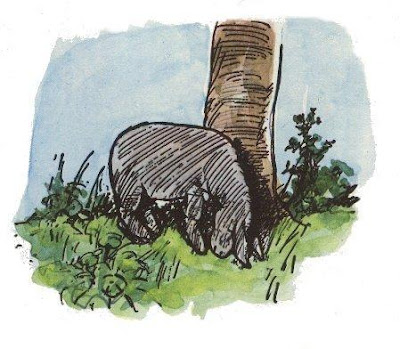 My wife told me, when we were first going out, that I reminded her of Eeyore. Today, I am proving that assessment to be a fair one. As a result of my down mood, nothing I planned to write this weekend has found itself written, nor will it. However, I have that whole new thing going, and I can't very well start blowing it off a week in. So...
.
The Collection Project Movie of the Day:.
. 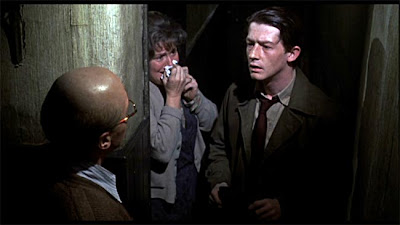 Among the things that make me gloomy lately is the fact that my region-free DVD player is on the blink, has been for some time, and for various reasons I've taken no steps to replace it, resulting in an inability to watch any of my foreign-region DVDs. Out of those, 10 Rillington Place (d. Richard Fleischer) is about as gloomy -- bracingly so, if "bracingly gloomy" is an achievable state -- a film as you're likely to find. It's the true story not just of English serial killer John Reginald Christie (a terrifying Richard Attenborough) and his crimes, but of the ghastly fate of Timothy Evans (an as-ever brilliant John Hurt), husband of one of Christie's victims, and, with his wife, one of Christie's boarders at the now-infamous titular address. Watching the ending of this emotionally brutal film unfold, there's a sense of outrage that is increased by the impotence one feels upon reminding oneself that you're not only watching a movie, but that the true events being depicted happened about 60 years ago, and, brother, that ship has sailed.
.
It's a nasty and relentlessly hopeless movie, filmed by Fleischer -- this is his best, from what I've seen -- as a kind of kitchen-sink nightmare that seems to be saying "When you're in the clutches of despair, be careful of who you call 'friend.'"
Posted by bill r. at 5:43 PM

I grew up in a household where this film was comparable to a minor religion. I kid not (father a Brit realist freak, mother a psych nurse, both fans of serial killer flicks...)

No wonder you're always so chipper. Then again, my own parents didn't like this sort of movie, and I'm no ray of sunshine myself.

Until you shell out for a region free player, spend some 40-50 bucks for a Phillips DVD player - hackable to region-free play.

Haven't had a problem yet, and probably cheaper.