You Gotta Have an Opinion!

Do you think God came down from heaven and sto--
. 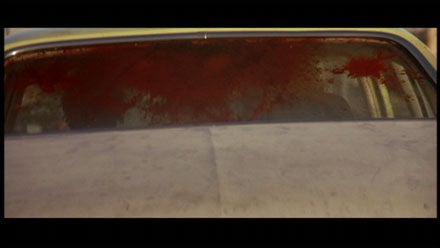 That part still makes me laugh, and clearly it’s still one of Pulp Fiction’s iconic moments. But while Marvin’s death is usually discussed, if at all, as one of those troubling crossroads where violence and comedy meet, what it signals to me is the moment when Tarantino’s film becomes brilliant.
.
Let me add, hastily, that by no stretch do I consider Pulp Fiction to be Tarantino’s best film. It, and Reservoir Dogs previously, haven’t aged as smoothly as I would have liked, but since Pulp Fiction is the film that knocked everyone on their ass, before most of them knew who Tarantino was, it tends (like Paul Thomas Anderson’s Boogie Nights), in my view, to get over-valued. Those opening scenes between John Travolta and Samuel L. Jackson, for instance, tend to grate on me more than they used to. Not that I think Tarantino has anything to prove – the two Kill Bill films and Inglourious Basterds, not to mention Jackie Brown, have done more to confirm his vast talent for me than any Pulp Fiction-related nostalgia ever could. But I think Pulp Fiction gets a bit of a pass from some people, because they remember what it was like to see it for the first time.
.
Still. Marvin’s head coming apart signals the beginning of the slow reveal of the film’s structure, and that fractured storytelling – much aped, often poorly, since the Pulp Fiction’s release – is still well worth celebrating. The story isn’t randomly jumbled up, and it’s not done so for some arbitrary reason, like it wants to “keep people guessing”. There is that revelatory moment in the diner, while Vincent and Jules are eating and talking, unwinding after the madness they’ve just been through (all that happened before noon!?), when the film repeats Tim Roth’s “Garcon! Coffee!” line, and the audience realizes what’s coming, and that opening with Roth and Amanda Plummer was not just some statement of attitude, but had a real narrative purpose. And we all began to feel giddy – expecting, let’s face it, more hilarious violence – but that’s not what we get. Later, when it’s all over, you start to think: Wait, when does Vincent die? Jules is already out of the picture by that point, isn’t he? He’s left the hitman business. Vincent hasn’t, and now he’s sprawled out in Butch’s bathtub, stitched up the front with his own gun. Huh. It would appear that, in Vincent’s case, the tyranny of evil men has had the Lord’s vengeance laid down up him. Not so Jules.
.
This could have all been communicated in a linear fashion, but in no way would it carry that same resonance. The Kill Bill films unfold in the same way, with, if anything, even more audacity, but, for many filmgoers of a certain age, Pulp Fiction offered a certain kind of soulfulness in its winding narrative that was particularly unexpected, and still highly valued.
Posted by bill r. at 3:05 PM

This is one of the best arguments yet I've ever heard for the non-linear chronology of PULP FICTION. But I'm still not convinced it was truly necessary.

Regardless of my opinion, I think you and I are in agreement that JACKIE BROWN and now, INGLORIOUS BASTERDS represent a certain maturation in Tarantino.

Thank you! I've long argued (like in my Tarantino discussion with Jason Bellamy) that the non-chronological narrative in Pulp Fiction is far from the cheap gimmicry that so many people seem to dismiss it as. It's essential to the film's themes: Jules' final speech wouldn't have nearly the resonance it does in a chronological movie, where we wouldn't have yet seen the consequences, the fact that Jules escapes his violent life while Vincent, who laughs at his partner's spiritual awakening, dies as he lived. That's what's brilliant about the film to me, not the uncomfortable laugh-inducing violence when Marvin gets shot. It's also brilliant that Jules' paraphrased Bible speech is initially just a bit of badass fluff, something cool to say before he kills someone, but eventually it becomes the route to his redemption once he thinks about the actual words he's saying — and forces the audience to rethink things, too.

And yes, Tarantino's done better work since, but this is still quite a good film.

Ed and Tony, I'll be honest -- I did not think I was taking any kind of controversial stance here. If the film had been told chronologically, then the ending woulf have been Butch and Fabienne riding off on Zed's chopper. Not a bad ending, but a bit flippant, and hardly resonant. As Ed says, the chronology is essential to film's themes, and it would have little to no weight without it. Not that you wouldn't be able to pick up on Jules' fate as contrasted with Vincent's, but it would feel...I don't know, tossed off, inessential.

I guess the argument could be made that the story could ve rejumbled so that the events happen at the same point in the film, but plays out in a linear fashion, by rewriting the whole script, but, again, I feel like it becomes less thoughtful, and asks less of the audience, if you take that route.

I don't want to get mired in another debate with Ed over this, or you for that matter, since I respect each of you and PULP FICTION is a movie I kind of like. But essentially, Bill, you just stated what I think of the film. Its resonance is derived from the use of this narrative device, and the film's emotional weight diminishes without it. To me, that's a gimmick. The story doesn't inherently carry this emotional heft on its own without the gimmick like Tarantino's better films do.

I'll contrast it with another film I once thought used a similar gimmick, MEMENTO. I also thought the power of that film was strictly attributable to its device of telling the story in reverse. But after seeing the chronological version included in the film's special edition DVD (an easter egg of all things), I sand corrected. If anything, that version is just as good if not better for the moral implications it casts on Guy Pearce's character, who essentially sets himself up to murder Joey Pants, a detail not altogether clear in the theatrical version.

In MEMENTO's case, the film works both ways on emotional and intellectual levels. In PULP FICTION's case, not so much. I won't belabor the point because I know I should judge what's on the screen, not what isn't. But I'd be lying if I said it didn't remind me of similar "tricks" pulled by fellow film students when I was back in college (pre-PULP FICTION), tricks which became less astounding because of their ubiquitousness and their underlying desire to impress.

Tony, any good film enhances its themes, emotions and ideas through form. Saying that Pulp Fiction wouldn't be as resonant if it was told linearly doesn't suggest that Tarantino simply used a gimmick — it suggests he used the proper form to tell this particular story! The film is structured as a loop: those who can reform and discover the virtues of forgiveness (Butch) and non-violence (Jules) manage to escape the loop, while those who continue along their violent path, the path dictated by their pulp genre origins, are trapped within the endless cycle. It's such a fulfilling union of style and content when thought of that way, though I know most people tend to look at Pulp Fiction as just a fun, trashy thrill ride.

Ed, as a formalist I can't believe I'm on the opposite side of this argument, but the key word in your argument is "enhance." To fall back on my earlier argument (simply to make a distinction because both films are quite different), MEMENTO enhances its point that things are not what they seem with its form. PULP FICTION merely instills the resonance you speak of with its form. The resonance isn't there without the narrative device.

I don't think any of us are in disagreement on this point. I simply think we disagree on the quality of the film and the intentions of the filmmaker in this regard.

We can't judge how good PULP FICTION would be without the jumbled timeline, but obviously my gut tells me it would be worse. In the case of MEMENTO, you seem to be arguing that the reverse-time version is worse than than the frontwards (or whatever) version. Wouldn't that imply that the reverse version IS a gimmick?

I feel like a gimmick is defined as something that either adds nothing, or hurts, the story being told, something that is pure flash, and nothing more. If placing the beginning of PULP FICTION's timeline at the end enhances it, then I don't believe it qualifies. It's not a gimmick -- it's storytelling.

Ed made most of my points because it took me so long to write that comment. Stupid phone/giant fingers.

More accurately, I said, "I also thought the power of that film was strictly attributable to its device of telling the story in reverse. But after seeing the chronological version... I stand corrected. If anything, that version is just as good if not better for the moral implications it casts on Guy Pearce's character, who essentially sets himself up to murder Joey Pants, a detail not altogether clear in the theatrical version."

I get that, but as Ed said in the case of PULP FICTION, the story is simply being told in the way that works best for it. Since that's the best way to tell the story, telling it another way with diminished results only proves that Tarantino did the right thing.

I completely agree with your assessment here, Bill. For me, when I think of a "gimmick" I think of something that is unessential to a story and distracting that usually masks a lack of actual substance. If you remove a gimmick, the story should, essentially, remain the same.

I would say that in Pulp Fiction if you remove the "gimmick," you get a different story, which, to me, means it's not really a gimmick, it's a natural, organic part of the story.

When I think of the non-chronological storytelling used as gimmick, I think of a movie like 21 Grams, a movie I loathed. I found it dull, lazy, laughably maudlin and melodramatic, and all-in-all a shitty piece of filmmaking. If you were to unscramble that movie and play it chronologically there would be nothing missing, it would just be obviously trite and boring.

Those are my two cents, at least.

I commented on your Stage Fright post but am notifying you here to make it more impactful. Gimmick? Sure, but that's just how I roll.

That's how I look at it, Jake. A version of PULP FICTION that ends with Butch and Fabienne riding off on the chopper feels to me, in retrospect, like it would be a giant let-down.

To be honest, the one time I saw 21 GRAMS, I liked it. Because I picked it up at a Blockbuster sale, I'll be getting around to that one eventually, and I'll have to watch it again to write anything about it. The fact that I found BABEL to be fucking tedious doesn't bode well.