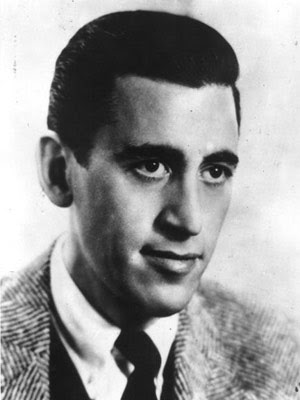 Of all the stories by J. D. Salinger that The New Yorker has just made available on-line, in honor of his passing, I recommend "The Laughing Man" most highly, but why not dig around a little bit more, if you're unfamiliar with his work. That might not include very many of you, but who knows? I didn't start reading him myself until a few years ago, due to a long-held prejudice against any literature that was believed, by teachers and peers, to appeal to teenagers. I finally pulled Nine Stories off the shelf one day, with the attitude that, well, it was about time, wasn't it? Considerably past that point, as it turned out, or, then again, maybe not. It's possible I wouldn't have loved that book, or The Catcher in the Rye (which has -- and I know how lame this probably sounds to anyone who hasn't read the book, but trust me -- the most heartbreaking use of the word "fuck" I have ever encountered), quite as much if I'd first read them when I was "supposed to". But Lord, did I indeed love them. They're pretty goddamn good, as Holden Caulfield might say.

My own favorite story from Nine Stories is "Down at the Dinghy". In a brief introduction to their free on-line selection of his work, The New Yorker promises there will be "more to come", so if you don't have a copy of Nine Stories handy, maybe if you're patient The New Yorker will come through on that one, too. If they don't, go to the bookstore.
Posted by bill r. at 4:57 PM

I still have my $1.50 Bantam paperback edition of "Nine Stories," purchased in 1975 when I was a Salinger-obsessed teenager, and I think I'm going to be cracking it open this weekend. "A Perfect Day for Banana Fish" is still the story I remember best, but they're all worth another look.

I think I have that same copy, Pat. "Banafish" is probably his most famous short story -- and it's a good one, without question -- but the ending of "Down at the Dinghy" is extraordinarily moving.

Nine Stories is lovely. If you haven't read Franny and Zooey, that one is fabulous, too. I read Salinger at the "right" age of fifteen, and had the cliched experience of being transformed by his voice and his perceptions of adolescents on the cusp of adulthood. But it wasn't any less meaningful to me for being the cliche that everyone goes through (which is a longer way of saying that I guess it's a cliche for a reason).

I keep thinking of SIX DEGREES OF SEPARATION, which isn't his, but has a long, funny referencing and dissection of his work, and then goes on to embody some of its spirit. He'll be missed.