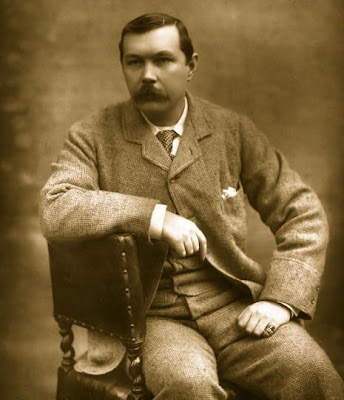 Robert Downey Jr. referred to him as a genius last night. Do you concur? As you know, I'm a novice reader. Actually... I'm PRE-novice. Maybe borderline illiterate, I guess.

What the hell? Where did YOU come from??

So...I would say Doyle was brilliant, if you see the distinction I'm making between "brilliant" and "genius". Holmes is a brilliant creation, and many of those stories are absolutely wonderful. But, I mean, Shakespeare was a genius.

I think Doyle was a pretty good writer who hit upon one absolutely brilliant concept- Holmes, of course. I find that the more I discover about Doyle, the more I just want to curl up with the Collected Holmes. His utter credulity regarding the fairy photos and willingness to swallow any flimflam (flimflam, I say!!) connected to communing with the dead make it hard for me to credit him as much of a thinker. He had another great character in Prof. Challenger and then totally torpedoed that with "Land in the Mist". I'm pretty hardcore about finishing what I start when it comes to books, but that one just defeated me. I had to stop when I realized the entire tale was building to Challenger giving in and acknowledging a seance. I think the fact that Doyle never has Holmes stray from logic and empirical knowledge speaks volumes about his sense the Holmes was a truly special creation.

I will also give it up for "The Maracot Deep"- that one gets delightfully batshit.

"about his sense THAT Holmes"

Though I think that, were I ol' Sherlock, I might just christen myself The Holmes.

I always feel Conan Doyle deserves far more respect than he usually gets as a prose stylist - his descriptive language is always remarkably evocative whilst also being clean and to the point, and he's a big influence on me in this regard. I'll also put up a hand for his generally disregarded historical works: "The White Company" is one of the best yarns, and works of period portraiture, I've ever read.

otherbill and Rod -- Er, I agree with Rod, as much as I can, though I feel like a bit of a faker, since I've read no Doyle outside of the Holmes stories. But I do enjoy his prose immensely.

Also, otherbill, I'm with you no Doyle's belief in fairies and so forth, though my understanding -- correct me if I'm wrong -- is that most of that aspect of his life came after he lost a son in WWI. Though clearly he was wrong about everything, and was apparently extremely gullible for such a smart man, I tend to give him a pass, due to the circumstances.

I think an excellent film could be made about Doyle's friendship with Houdini, and how it fell apart due to Houdini's crusade against mystics, psychics, and other scam artists. Doyle was wrong, but kind, and Houdini was right, but a bit abrasive. It's very interesting stuff.

Also, have any of you read Julian Barnes's novel ARTHUR & GEORGE, about Doyle's work on behalf of George Edalji, who was wrongly accused of butchering livestock? It's excellent.

So Wikipedia tells me that Doyle's interest in spiritualism came after losing not only his son, but a good half dozen other close relatives in a very compressed time period. I was not aware that it was quite like that. So allow me to piggyback on your laudably compassionate view of his gullibility in such matters.

Glad to hear ARTHUR & GEORGE is worthwhile. It's been on my (near endless) to-read list for some time. I've generally enjoyed the Barnes that I've read- FLAUBERT'S PARROT in particular.