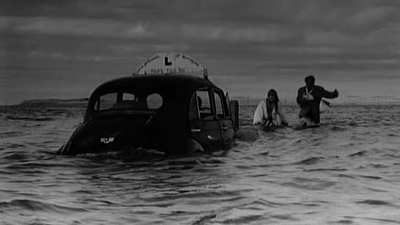 If I may speak very generally, I've recently noticed that Americans and Europeans, or at least the filmmaking population within each group, regard the sea -- any large body of water, really -- quite differently. In American films, the beach or the lakeside is usually a good-time destination, and while hiccups may occur along the way, such as the mass slaughter of teenagers, the land adjacent to water is never really looked at askance. It is still lovely and pure and nice, in theory. Often in actual practice, even. European films, however, often depict the land itself as homely, rocky, an obstacle. Those who would seek out this land upon retirement or even just for vacation are often doomed or damned -- at the very least, they're kidding themselves. In an American film, a divorced woman would go to the beach to drink wine and be free and eat spaghetti or whatever; the European equivalent could easily find that same woman seeking death, either by her own hand or someone else's. What might be seen as a symbol of possibilities can easily be seen by another as both symbolic, and a literal example, of sudden endings, as well as the flyspeck nature of our place beside it. 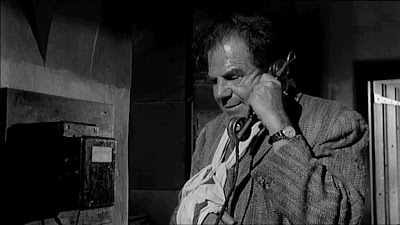 Such a film is Roman Polanski's Cul-de-Sac (pegged for a Criterion release tomorrow). In it, a surprisingly trim Donald Pleasence and his young wife, Francoise Dorleac, have recently retired to an 11th century seafront castle. They are by turns snippy and goofily affectionate with each other. Though when we first see them they are saying goodbye to visitors, it's very clear that they are basically cut off from the rest of the world, unless they choose otherwise. Or unless otherwise chooses them, as happens when two gangsters, one fit and snarling (Lionel Stander), the other weak and dying (Jack MacGowran) force their way into the couple's lives. MacGowran is hardly a factor here, and dies soon anyway, but Stander's hurricane force immediately takes over everything, and the film becomes, while ostensibly a thriller, also a kind of Beckettian comedy of manners, and a Beckettian sexual farce (of the type where sex is never had), and what would happen if Beckett ever wrote a gangster movie.

Except in this case, Beckett obviously didn't, despite a plot structured around the anticipation of the arrival of a mysterious, never-to-arrive man named Katelbach, and for all its claims to strangeness, Cul-de-Sac in fact follows some rather standard narrative lines before reaching its violent, absurdist climax. For one thing, instead of a "Magical Negro", Cul-de-Sac has a "Magical Gangster", close cousin to the "Magical Hobo" (see Boudu Saved from Drowning). There are many obvious differences between these two ideas -- the former exists in a world of sentimentality, the latter in satire and cynicism -- but both are types that exist to shake up the characters who surround them, either for the better or worse. In the case of Cul-de-Sac, it's ultimately for the worse, but that's only because Stander has helped to highlight all the faults in both the Pleasence and Dorleac's marriage, but the bourgeois (well of course) uselessness of their lives, and the lives of their friends.

The problem seems to be that they are modern, in that they live now (or in 1966, but you get my point), and that...what? The past was more honest? No...but the castle they inhabit would appear on the surface to be a haven, a dream. At the same time, this means they're living in a euphemism for excess ("This place is a castle/palace!", etc.). As if that wasn't enough, the castle endures (like the sea, come to think of it) -- 900 years old, and Pleasence and Dorleac will be as remembered within its walls as a sneeze. This despite their efforts to have some connection that medieval past -- at one point, the characters drink mead. But the last guy to drink mead in that castle's gone too. His drink is remembered better than he is. 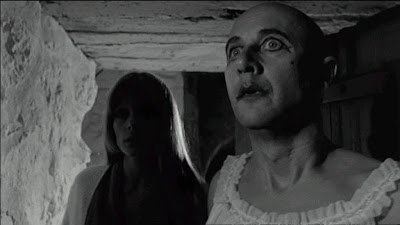 All of this Polanski buries under an unfortunate layer of academically acceptable farce. I say "academically acceptable" because there is a strain of humor to be found in the arthouse (as well as in Literature, with the big "L") that attempts to wring laughs from the premise of a grown up person with grown up problems which are also metaphorical, doing things that would have made them laugh when they were twelve. In Cul-de-Sac, see the hotfoot Dorleac gives Stander. See also Pleasence dressing all funny, which is to say cross-dressing, and stumbling around. This is all very low level absurdism, and has never been Polanski's strong suit. There is humor in his best films, such as Chinatown and Rosemary's Baby, but the jokes rarely announce themselves as jokes. In his comedies, among which this film must be counted, along with the equally and similarly problematic (and equally great-looking) The Fearless Vampire Killers, the jokes are presented as jokes, without sophistication, and as such are deadly. The idea, I guess, is that they are childish jokes in a setting where one would hardly expect a childish joke. And comedy is all about upending expectations. So there you go. 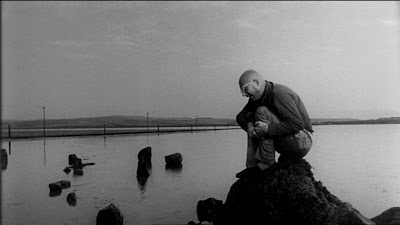 Sir, you beat me to the title. I watched the Blu-ray of "Cul-De-Sac" last night and started writing my piece on it, under the title "Waiting for Katelbach." Because it's such a perfect title for this film.

Oops! Sorry! That was a last minute choice, too, because I tend to try to use a line, or part of a line, of dialogue, but nothing stuck out for me as useful in that way.

And here I thought I was being clever.

Also, I'm starting to think that you can't not, because out of a sample of three, 100% of people writing about CUL-DE-SAC chose WAITING FOR KATELBACH as their title. That's a significant amount.

Apparently, the filmmakers chose "Waiting for Katelbach" as their working title. I discovered this while endeavoring to title my own CUL-DE-SAC review (which I wrote before reading or having any knowledge of yours; honest! I swear! don't take my arms!). Now, if you Google the phrase in quotes, none other than this review rises to the top. Good show old chap!

Is anyone else starting to get creeped out by this?