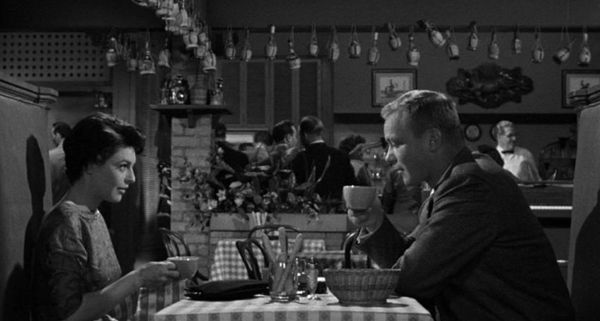 [Spoilers, of a sort, for Nightfall follow]
.
Jacques Tourneur's Nightfall is neither the first nor last film noir to move its action out of the city and into the country. Nicholas Ray's On Dangerous Ground and Joseph Losey's The Prowler, for example, both do this as well, and the crime fiction that preceded and then parallelled the noir cycle could take place anywhere -- James M. Cain and Jim Thompson both habitually found fringe rural diners and so forth to be fertile settings for their stories of lust, corruption, and murder. But there's a curious effect to the choice of moving the action to the country from the city, which would seem at first blush to be the ideal location for noir, because in film's like Nightfall decent people flee their urban bear-traps, but the corruption always follows.
.
Tourneur's film (based on a novel by the great David Goodis, one I'm sorry to say I haven't read) follows one man, David Vanning (Aldo Ray, in full ordinary-guy mode), as he attempts to escape the aftershocks of a trauma he suffered some months back when he and his friend Dr. Gurston (Frank Albertson) were on an extended camping and hunting trip in Wyoming. They had the rotten luck of witnessing a single car accident, and in that car were John (Brian Keith, as almost the villainous flip on Ray) and Red (Rudy Bond, frightening and sometimes hilarious -- one crucial scene involves Red's realization that John doesn't really like him, and Red almost panics in his need to know why, yelling "I gotta know! I gotta know real bad!"). These men are bank robbers, and for a host of reasons they've decided that these two campers, who only wanted to help them, can't wake up the next morning. The doctor is murdered, and David is left for dead. The real problem, however, is that John and Red, in their escape from the scene, grabbed the doctor's medical bag by mistake, leaving their ill-gotten money behind for David to hide.
.

Vanning makes it back to the city, taking jobs under an assumed name. He eventually meets Marie Gardner (Anne Bancroft), with whom he strike up a hopeful but nervous relationship, until John and Red reappear. Meanwhile, an insurance investigator, played by James Gregory, is searching for Vanning for his own reasons.
.
So that's the plot of Nightfall, and it all comes to a head in a snowy expanse of Wyoming farmland. Once the action moves in that direction, Burnett Guffey's photography brightens up, as if the perpetual night and shadows of the city can no longer compete with a sun unhindered by all those buildings, never mind the power of that shining white snow. It's not necessarily that films like Nightfall are trying to make the case that things are better in the country -- in The Prowler, the characters seem to move out of the city and into what almost looks like a nuclear wasteland -- but they're certainly different, and anyway it's in the country that these characters are often looking for peace, and safety. In the city, everything's always clouding up, the buildings hang over you, the people hem you in and crowd you, and if they don't want to kill you, their sheer number makes it difficult to escape those who do. In the city, if it's not all money, then it's all booze, and one's as bad as the other.
.
In theory, the country's a new beginning. In Nightfall, Vanning, Marie, and Ben Fraser, the insurance investigator, band together as three decent people to bring an end to all this -- Vanning can give Fraser the money, Fraser can prove Vanning's innocent, and John and Red can be dealt with by honest lawmen. And all of this will happen, can only happen, by going to Wyoming.
.
The problem is that John and Red follow. The safety of the country doesn't last, and the decent people are left, unarmed, with the men pointing guns. Then again, without wanting to spoil too much -- although this is no doubt too much -- it must be said that the agent of Vanning's salvation comes in the form of something that you'd never find in the depths of Los Angeles or San Francisco or Chicago or New York. The country comes through after all, perhaps. Still, there's something unspoken in films like Nightfall, something about the purity of a place, if it ever was pure, being tainted by what our decent characters have allowed to follow them. There's something here about corruption and evil living out on the fringes, or anyway among the majority of the populace, and finding the need to travel inland.
.
-------

Nightfall will be showing as part of TIFF's Hollywood Classics series on March 6 and 8. This post has been part of the For the Love of Film (Noir) blogathon.

I skipped down to "so that's the plot of Nightfall" because I haven't seen this and would like to. Rewatching several noirs over the past months it occurred to me that the countryside makes multiple appearances during the period/genre. They Live by Night, Gun Crazy, Out of the Past, The Killers and, hell, Asphalt Jungle, despite its title, ends up with Sterling Hayden dead on a ranch surrounded by horses.

It's an interesting juxtoposition and in all the noirs cited, it seems to be understood that the country appears to be a safe haven to the characters themselves but the audience knows it is their dark nature that will follow them there and doom them nonetheless.

I really hate doing plot summaries, unless there's something more to extract from it than here. I feel like I'm obliged to do it, and I wish I wasn't.

And in NIGHTFALL, the heroes don't have a dark nature. Aldo Ray was just in the wrong place at the wrong time. Broadly, you're right, though, and THE PROWLER is a really good example of it, as well, as I mentioned. GUN CRAZY, too, in particular.

Maybe "dark natures" is too sweeping. Perhaps, the business of consorting with the wrong types drags them down and follows them around. After, most of the characters, like the male leads in Gun Crazy, Out of the Past and They Live by Night in particular, are good guys dragged down by the wrong crowd.

It doesn't even need to be a matter of consorting with the wrong types. I'm not nitpicking you here -- it's just that, in film noir, mere proximity to the Reds of the world can sometimes be enough.

Aldo Ray was always worth watching, but didn't get much respect.

When noirs move to the countryside, I think of Sherlock Holmes' comment that the country fills him with a certain horror and "that the lowest and vilest alleys in London do not present a more dreadful record of sin than does the smiling and beautiful countryside."