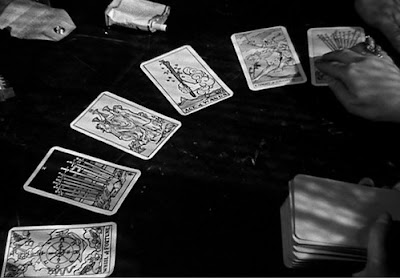 Watching Edmund Goulding and Jules Furthman's Nightmare Alley the other day, and watching Tyrone Power's life play out in line with an unfortunate fidelity to Joan Blondell's Tarot reading (and cringing to the point of laughing at the film's climactic line), I realized that this film and A Face in the Crowd are not exactly dissimilar, are they? Separated by ten years, each tells the story of a man who rises from humble, at best, beginnings through will and a talent for immorality. In Nightmare Alley (based on a novel by William Lindsay Gresham), Tyrone Power plays Stanton Carlisle, who, in the beginning of the film, is working at a carnival as the mouthpiece for Zeena's (Blondell) mentalist act. It's a basic bit of business, but when he gets wind of another, more intricate and ingenious form of the act that Zeena used to perform with her now-perpetually-soused boyfriend Pete (Ian Keith), Stan takes steps to obtain that secret for himself. What happens to Pete is something Stan writes off as an accident, but I have my doubts.
. 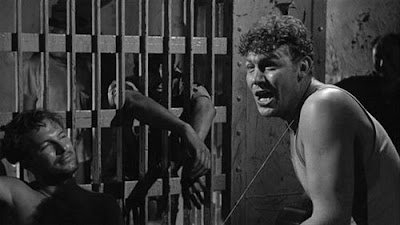 Meanwhile, over in Elia Kazan and Budd Schulberg's A Face in the Crowd, Andy Griffith (in a scorching performance that I'd wager a fair amount of the population isn't even aware he ever gave) plays Lonesome Rhodes, whose first moment on-camera shows him giving such a nasty, mean-dog look to his wards at a dusty old Southern jailhouse, that it's not hard to see that his good-old-boy demeanor, when faced with interested journalist Patricia Neal, hides a pretty grimy soul. Like his spiritual cousin Stan Carlisle, Rhodes is about to rise to the top, putting on a sweet face and exhuding down-home charm, and rising up through radio and into television, as a beloved, influential Will Rogers-type, with a heart of coal. What's interesting is that Tyrone Power had such an open, nice face, when he needed it, and he's such a gregarious fellow in the early going of Nightmare Alley. Carlisle is one of those guys, like the anti-heroes (which is being kind) of Donald E. Westlake's novel The Hook, who are more or less perfectly content to live their lives as decent human beings, until the opportunity for advancement forces them to realize that they're actually pure bastards -- they'd just never gotten their shot before. 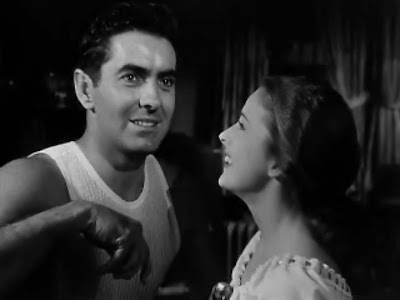 One is tempted to say the same thing about Andy Griffith and Lonesome Rhodes, but A Face in the Crowd actually preceded The Andy Griffith Show, after which point Griffith was nationally embraced as a sweet father and wise and funny Southern gentleman. Prior to his turn as Rhodes, Griffith did have success as a comedian and actor, and this was played on for A Face in the Crowd, but what a bombshell it would have been had the film come out in the mid-60s, when his hit (deservedly so) TV show was in full swing. The point is, Power feels like a gentle soul in Nightmare Alley's first half, and Griffith doesn't. We know Andy Griffith, of all people, is no good in his film. Power's shift towards casual amorality is more of a shock, though Nightmare Alley's colorful, shading into grotesque, early carnival setting does almost act as that film's version of Griffith's feral expresion. 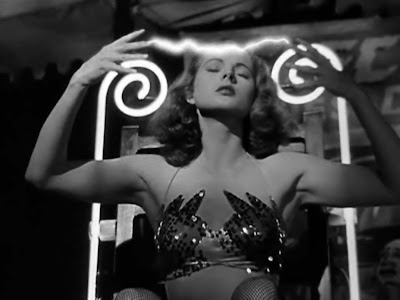 In any event, both men, Carlisle and Rhodes, do maintain a level of humanity, or try to, throughout each film, but they need a hot piece of ass to kick their hearts in gear (this works better for Carlisle than it does for Rhodes), and even then they have to throw someone else over in order to get started. But mainly, they want power, and money. Each is willing to pervert, or manipulate, grand American themes -- faith in Nightmare Alley, basic human values as it applies to the political process in A Face in the Crowd -- to do it, and each man gets their hash settled pretty good as a result. At least they got to enjoy their place at the top of the carnival for a little while. 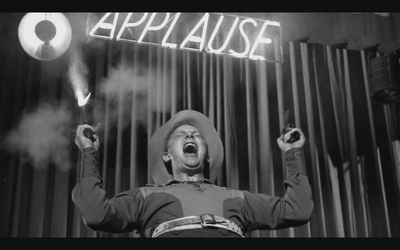 I already have FACE IN THE CROWD on my DVR anticipating it would be of interest. But I wasn't familiar enough with NIGHTMARE ALLEY to care either way.

Thanks for your analysis. I'm really intrigued by both of these films, now.

A FACE IN THE CROWD is obviously also terrific, though it's been a little while since I've seen it. I admire it most for the performances, though it's overall a very interesting film.

I haven't seen NIGHTMARE ALLEY recently enough to have a good enough memory of it (except that I remember it being great) but I love A FACE IN THE CROWD and know that one by heart, so kind of the opposite of your situation. Andy Griffith gives one of those "so good it's stupid" performances that I'm still kind of stunned didn't get nominated.

Also, I wouldn't have thought of these in any of the same contexts until this piece so now I'm anxious to NIGHTMARE ALLEY again.

Andy Griffith gives one of those "so good it's stupid" performances...

Yes, it's stunning, especially -- although this isn't why it's good -- coming to it, as so many people do, after knowing him from his TV show...it's like a knock upside the head. That first shot of him, in his bunk, swinging that mad-dog look at the guard...you see it and think, "What the fuck!?" I mean, that's Andy of Mayberry!

But he's just such a naturally gifted actor. He was so great on his show, too. As much as I love the guy, I wish there was a bit more variety, a bit more crazy stuff like A FACE IN THE CROWD, on his resume'.

And I do know A FACE IN THE CROWD reasonably well. I've seen it three or four times, but it's still been a while.

Also, NIGHTMARE ALLEY is great. The carnival stuff is the best, in my opinion, at least visually, but also because I just plain love carnival/circus stuff, especially when it's dark and bleak, but the whole thing is great. My only wish is that it ended about a minute and a half early. There's a line, the climactic line I referred to in the post, that feels like such a natural ending, but then it goes on a little longer, and slightly softens (not by much, really, but a tiny bit), and it makes me wonder if Goulding hadn't planned on ending it there, but the studio made them ease up just a little bit. Because the ending I'd prefer is about as horrific and pitch-blackly humorous thing I can imagine.

I'm definitely seeing it again now. And your post, picture-wise, reminded me a bit of Unexplained Cinema. I may have to copy it for a slow day (oh, and I've put up SPOILERS so you won't have any more phone conversations ruined for you).

Snow coming again on Friday. Mabel says it's gonna be a real humdinger.

How 'bout our boys at Mountain Valley High? Might take State this year.

Of course, I pulled all those pictures off the internet. I have an old computer, and therefore do not have the right drive to pull images from DVDs. If I did, my NIGHTMARE ALLEY pictures would have been even better. I still don't have the FACE IN THE CROWD DVD, so those would have been the same.

I liked your little one-act.

Thank you. It was very suspenseful wasn't it? I wrote it over a three month retreat at an artist's community in Taos. My lesbian bunkmate loved it.