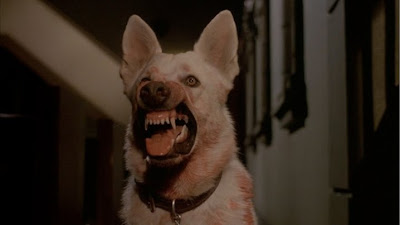 Or not. Depends of a few factors, really. To discuss those factors, and the rest of Sam Fuller's White Dog, why not head over to Joseph Campanella's Cinema Fist and join in this month's TOERIFC discussion, which begins at 10:00 AM, EST? Huh? Why don't you!?

On another, more personal, this-blog-related note, I think I'm going to unveil yet another series in the next couple of days. It's called "Deep Cuts", and it's quite uncomplicated. I simply watch a film by a notable director and write about it, but in each case it will be a film that, for whatever reason, is not that well known. For instance, first up will most likely be Alfred Hitchcock's The Paradine Case. Not well known, and not well liked, either, although that last element doesn't necessarily need to apply to all the films in this series. Anyway, look for it on Friday or Saturday.
Posted by bill r. at 8:02 AM