Three whole tiny reviews of Hammer and Hammer-esque films for you, the reader. Enjoy, or don't.
. 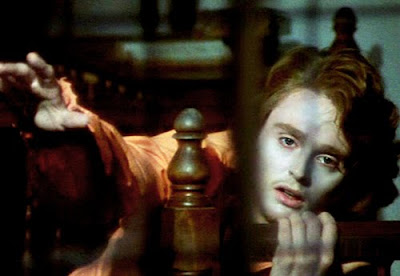 Demons of the Mind (d. Peter Sykes) - This apparently all-but-forgotten Hammer film from 1972 is basically a "sins of the father" story about a nobleman named Zorn (Robert Hardy) who has lived much of his life fighting the desire to commit bloody murder. Fearing that he's passed this violent gene down to his son and daughter, Emil and Elizabeth (Shane Briant and Gillian Hills), he keeps them locked in separate rooms in his sprawling manor, and also periodically bleeds them in hopes of ridding them of their depraved tendencies, which include, by the way, incest (the original title of the film was Blood Will Have Blood). The eternally bizarre Patrick Magee features as the shady doctor hired by Zorn to oversee all these various treatments, and to try and expel Zorn's own demons. Naturally, all of this is discovered by outside parties, and things turn out poorly. But the film, I thought, was quite good, and creepily strange, too, in both its mood and its willingness to keep the audience confused. Magee's introduction to the story, for example, leaves several questions scattered behind it, and no one to answer them. But that didn't much bother me, not least because Magee's eventual exit is a stunner. The short version of all this is that there's no reason for Demons of the Mind to be thought of as third-tier Hammer: it's serious, loony, Gothic and bloody.

As a side note, I found it curious that, on the DVD commentary track, Sykes, writer Christopher Wicking, and co-star Yvonne Griffin claim that Robert Hardy overdid it a bit, while not saying a word about Patrick Magee's spastic face. I liked both performances, and in any case don't see why Hardy was singled out.

I Sell the Dead (d. Glenn McQuaid) - McQuaid's debut film, inspired by a particularly wonky brand of horror comics -- I admit I'm guessing slightly here, based ont he occasional freeze frames that then morph into comic book panels -- is about two grave robbers, of the Burke and Hare variety, named Blake and Grimes (Dominic Monahan and horror filmmaker Larry Fessenden) who, after being freed from the iron fist of their previous employer (Angus Scrimm), go freelance and find their graverobbing experiences growing more and more bizarre. The find themselves unearthing the undead, a business which proves very lucrative, until they find themselves at odds with a rival graverobbing gang. It's all pretty slight, and occasionally over-stylized, but it's also a pretty fun time. Monahan and Fessenden pull their weight, ably supported by people like Ron Perlman, and the last half of the film, which is considerably more eventful and pulpy, is actually better than the first half, which is a rare quality. This movie isn't much, but it's enough. 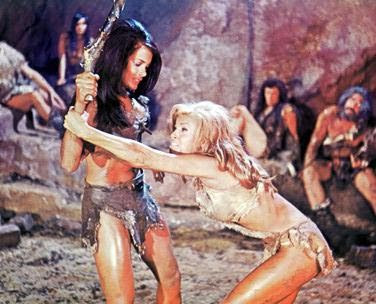 One Million Years B.C. (d. Don Chaffey) - Speaking of Hammer, I just saw this somewhat atypical-for-them film over the weekend, and two things struck me. One is that I never knew that this was a Quest for Fire-esque grunting-and-pointing caveman movie, with no English dialogue at all. This revelation both impressed and, somehow, disappointed me. The other thing that struck me is that somewhere, someone is no doubt furiously typing up a thesis on how Stanley Kurbick spent roughly one-sixth of his career ripping this film off. Most obviously, Kubrick included a shot of cavemen getting pummeled by falling rocks during one of Alex's fantasies in A Clockwork Orange which is actually from One Million Years B.C., but the multiple shots of dry, rocky vistas at dusk that opens 2001 is reminiscent of the opening of the Chaffey film. So obviously Kubrick was a no good thief who never had an original idea of his own, and he also never had the stones to include a single pterodactyl fight in any of his films. Game, set, match, Chaffey and Co.
Posted by bill r. at 8:44 AM

Labels: Capsule Reviews, Demons of the Mind, Hammer, I Sell the Dead, One Million Years BC, Patrick Magee, Stanley Kubrick

Interesting stuff there. That "I Sell The Dead" looks like I would like it. Gonna give it a go.

Thanks, Wings. I Sell the Dead is a fun movie. No big deal, but worth watching.

Kubrick. What a rip-off artist. You know the bear blow-job shot from The Shining? Directly lifted from an episode of Hanna-Barbera's Yogi Bear show. Shameful.

I love me some Hammer. Hammer-time!

My favorites are Curse of the Werewolf and Vampire Lovers, though. Seen those, Bill?

Wait... is I Sell the Dead on DVD? I remember hearing of that movie feeling that I wanted to see it and then it disappeared.

I've never liked Larry Fessenden's movies that much, but I always like when he acts in movies. He also seems like a cool guy that helps his friends get their films made on small budgets.

Greg - Kubrick also stole the idea for Paths of Glory from World War I. The guy was a fraud.

Tony - I've seen The Vampire Lovers (many years ago), but not Curse of the Werewolf, because I've been holding out on it until I've read the source novel, Werewolf in Paris by Guy Endore. The adaptation is probably very loose, but still, I want to wait.

Fox - I Sell the Dead is On Demand through Cox, which is how I saw it. And of Fessenden's work as a director, I've seen Wendigo and The Last Winter. With Wendigo, I had a sense of admiring the effort, but never really getting into the film itself. The Last Winter had a lot more potential, but it became so goddamn preachy that I just couldn't give it a pass.

Nice reviews ... how low those hobbits have fallen. He is, of course, the Ugly One, Merrybuck Brandysnifter or something. Serves him right.

Wow, Rick. That's harsh. What did he ever do to you? Besides that, I liked the movie! You're acting like I hated it!

What can I say? It was kind of a stream of consciousness comment ... but I never liked Monahan much, even in the "Lord of the Rings," which I adored, by the way, but especially not Lost. I got that you liked the film, though ... my comment was directed his entire millieu ... also, it was kind of a goof.