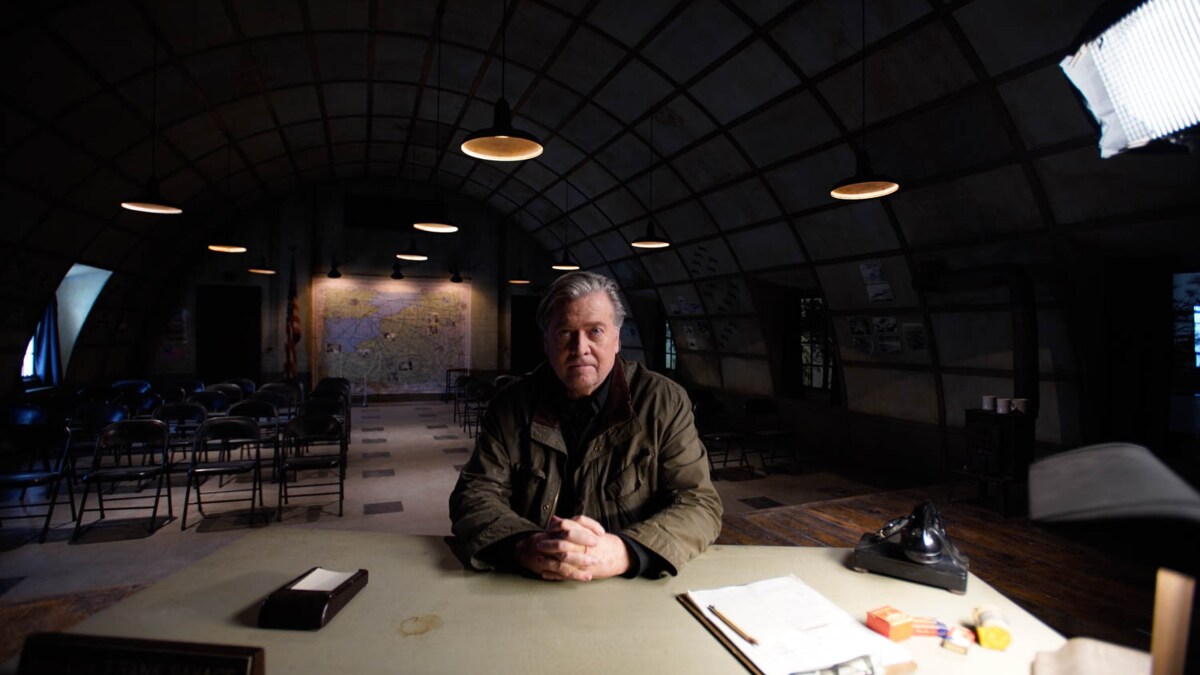 In the late 1990s, Errol Morris screened a cut — what he believed would be the final cut — of his documentary Mr. Death: The Rise and Fall of Fred A. Leuchter, Jr. to a film class at Harvard University. In this version of the film, Leuchter, a designer and builder of electric chairs and later lethal injection machines, is presented alone, explaining why he would go on to a career of writing “scientific” papers denying that gas chambers were ever used by the Nazis in World War II to execute Jews. These papers were used, and even commissioned, by the neo-Nazi Ernst Zündel at his trial in Canada, on charges that his publications denying the Holocaust criminally spread false information. Morris’ original intention was to focus solely on Leuchter: There would be no experts or historians present in the film to refute Leuchter’s blatant nonsense. Morris wanted to understand how this man, seemingly free of anti-Semitic beliefs, could believe something not only so vile, but so easily disproved. To do that, Morris felt no need to hear from anyone but Leuchter. In the Leuchter material present in the final, quite different, 1999 picture, Leuchter refers to a time in his life when he was contacted by a state prison system about designing a gas chamber for their executions. Leuchter himself says that this made no sense, as his expertise was only in electric chairs and lethal injection machines — that knowledge does not translate to an understanding of gas chambers simply because each device is used in executions. Nothing else in Mr. Death so precisely illustrates the man’s lack of self-awareness and intellectual shallowness better than that moment.

However, the Harvard film class disagreed. According to Morris, in an interview with Ron Rosenbaum, roughly half the class bought into Leuchter’s theories, and the other half saw Morris himself as a Holocaust denier:

Morris ultimately decided that the class’ professor, who questioned how Morris could not call Leuchter to task, was correct, and so he, Morris, did interviews with experts and cut them into the film. Expertly, it must be said, and for all I know the version of Mr. Death most people know is better than what he showed to that class. But I’m not convinced that Morris actually agreed with that professor, because in his next film, 2003’s The Fog of War, Morris stuck to his moral and aesthetic philosophy. The subject of The Fog of War, former U.S. Secretary of Defense Robert S. McNamara, truly is the only person on screen. We hear only him speak (barring a rare example of Morris interjecting), and outside of stock footage and news footage cut in, he is all we see. The Fog of War is McNamara telling his story about 20th century American wars, focusing ultimately on Vietnam, the war he controlled. Morris does not attack, or directly refute, anything that McNamara says, but instead contrasts the man’s words with images of World War II and Vietnam bombing campaigns, for example, as a way of injecting his own anti-war (a simplification, but anyway) philosophy into the film. This, combined with McNamara’s own moral ambivalence about his place in the history of the 20th century, makes The Fog of War’s point of view, finally, unmistakable. Somehow — and I’ll confess that I don’t have a theory as to why this turned out to be the case — no one mistook Morris this time. He, in fact, won the Best Documentary Oscar for that film. Everybody got it. Four years after being pressured into changing his aesthetic for Mr. Death, Morris took another swing at it and everybody said, “Yes, okay, this makes sense.”

Errol Morris began his career making documentaries about “unusual” people. Look at the scientists and lion tamers and gardeners in Fast, Cheap, & Out of Control, or the pet cemeterians in Gates of Heaven. His career blew up with the true-crime film The Thin Blue Line, a landmark documentary that changed the course of a man’s life. None of this is to say that before The Fog of War and Mr. Death that Morris’ films were apolitical, but rather his politics were either subtextual or buried under layers of things that interested him more, such as human behavior, motivation and psychology. But after The Fog of War (barring digressions into tabloid insanity in Tabloid and his fascination with photography in The B-Sides), Morris’ films skewed into the overtly political. First, there was Standard Operating Procedures, his brilliant, dispiriting, yet coldly empathetic film about Abu Ghraib, and 2013’s The Unknown Known, his Fog of War-esque documentary about another Secretary of Defense, Donald Rumsfeld. Though he once seemed to seek out obscure stories that could illustrate his philosophy of human existence, the very specific, front-page news stories of modern times seemed now to obsess Morris.

Most recently, we have American Dharma, Morris’ documentary about Steve Bannon, the film producer/director/political strategist/alt-right manipulator who, more than anyone, structured the political campaign that ultimately succeeded in pouring Donald Trump into the Oval Office. In this film, Morris has dispensed with his Interrotron, a camera device he invented that allows his interview subjects to address his questions directly, meaning they appear to be looking directly into the camera (which they are). Morris has used this to great effect for years, but with Bannon he chose to sit across the table from his subject (in a studio constructed to look like the air hangar in 12 O’Clock High). It’s more intimate: You can see Morris (or his back anyway), and you hear him more often having at times a straight, fairly genial conversation with a man whose politics and philosophy he abhors.

You can imagine what happened. When American Dharma was playing festivals, critical reactions were not unlike those that Morris received from that Harvard class that saw the original cut of Mr. Death. In his review for rogerebert.com, critic Peter Sobczynski calls American Dharma “fan service,” because Bannon is familiar with Morris’ work, and goes on to say:

The closest the film ever gets to this point comes when Morris admits that he voted for Clinton over Trump and Bannon seems genuinely baffled that someone who he considered to be on his wavelength would even consider doing such a thing.

This is, in fact, wildly inaccurate. Morris admits to voting for Clinton out of fear in the primary, and in the context of the conversation it’s quite clear that both Morris and Bannon can’t quite believe that he, Morris, didn’t vote for Bernie Sanders. There is no question that Morris would have ever voted for Trump, and the fear he felt that led him to vote for Clinton, came from Trump (as well as Bannon). It’s a disingenuous, or at least thoughtless, review.

At another moment, after Bannon has emphasized his harnessing of the “angry voices” that filled the comment sections of Breitbart News (of which he was formerly executive chairman) and declared that Trump’s electorate was telling “the establishment, ‘go fuck yourself'," Morris turns the tables on Bannon, calling Trump the “fuck you” President: “You want health care? Fuck you. You want clean drinking water? Fuck you.” Bannon’s momentary silences in the face of such remarks seem like an onscreen scorekeeping (chalk one up for Morris), but it is far less satisfying than a further, confrontational follow-up question might be. Many of Morris’ challenges to Bannon’s assertions come not in discussion but in a sort of cinematic esprit de l’escalier, by presenting (with a variety of effects) headlines, tweets, quotes and clips that undercut or contradict some of Bannon’s claims.

At other times in the film Morris, for example, calls Bannon crazy and pushes him on the basic racism of his politics. While Bannon is allowed to defend those politics, Morris runs across the screen one headline after another, making explicit the racist consequences of Bannon’s rhetoric. If Morris doesn’t call Bannon an asshole to his face, it’s because he wants to hear him, and understand why we’re here. He calls Bannon an asshole with his film. It also ends with a prophecy of Bannon’s own philosophy of apocalyptic change. Brody writes: “The symbolic apocalypse [that Morris depicts] is, among other things, victimless, even self-sacrificing.” Forgetting, apparently, that the film ends with a blasted landscape (Morris’ own set has gone up in flames) leaving only Bannon. If that’s an image of self-sacrifice, then I’m John Robert Fox.

Morris has a distinct aesthetic and moral philosophy: When confronting someone he disagrees with, even hates, he would rather understand than attack. This strikes me as noble and intelligent. But even though he still criticizes the likes of Leuchter and Bannon throughout those respective films, many audiences and critics would rather he blast them with a metaphorical shotgun, thereby winning points for one side or another, with nothing to hold onto afterward.

Hi,
I'm so pleased that you're posting with regularity again! The attempts to bury this film are puzzling to me -- as if the ideas Bannon puts forth are so powerful and contagious. It is even difficult to find a physical copy of it -- when you Google search for 'American Dharma DVD' (forget about blu ray) the Amazon page is the fourth result, and doesn't even have an image. Trying to bury these ideas only makes them more attractive to some. Airing them in public shows them for what they are.

Thank you. And to my knowledge, there is no physical copy at all, nor is one planned.

This reminds me of the controversy over Henry Bean's The Believer.

From Ebert's review:
"When I saw it at Sundance 2001, where it won the Grand Jury Prize, I wrote "some feared the film could do more harm than good." I shared those fears. The film's hero is so articulate in his retailing of anti-Semitic beliefs that his words, I thought, might find the wrong ears. I understand the film, I was saying--but are you to be trusted with it"