My obsession with the films of Jean Rollin continues, apparently. This time around, I've been facilitated by the pending Kino Lorber release of two latter-day Rollin films, The Living Dead Girl from 1982, and Two Orphan Vampires 1997. To begin... 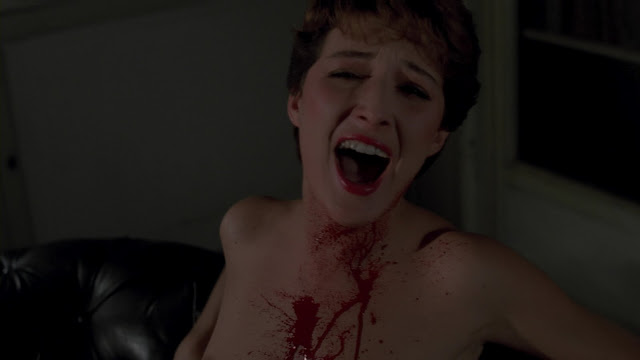 The Living Dead Girl - Counting the two movies under discussion tonight, I have seen seven Jean Rollin films this year, and I keep expecting one of them to bore me, or to be something less than interesting. Well, I'm not there yet, and this one, along with Fascination, is one of the best yet. In fairness, I figured that if I ever were to be bored by Rollin, this wouldn't be the one to do it, largely because in his essay about these titles that is included with both discs, Tim Lucas says the climax of The Living Dead Girl is "...one of the most emotionally incendiary finales in horror film history." I have to admit that getting there is not necessarily a jaw-dropping experience, though it's not a bad one, either. The film begins with three grave robbers plundering the tombs beneath an old French castle where Catharine Valmont (Francoise Blanchard), dead two years as the film begins, is interred. Or she's supposed to be dead. She's not, though, obviously, or not dead dead, and she rises from her coffin and rather brutally takes them out (toxic waste plays a small part in these killings, for no particular reason -- if the implication is that Catharine is revived by this stuff, it's not made at all clear, but anyway I don't believe that's one Rollin was going for). Catharine's history and relationship with Helene (Marina Pierro) is revealed in flashbacks, and essentially the deal is when the two were young girls they made a blood pact, promising that when one of them died, the other would follow fast behind. This didn't happen, Helene is still alive and well, and Catharine is left wondering the castle and the fields that surround it, where she is seen, and photographed, by Barbara Simon (Carina Barone) who is travelling the countryside with her husband Greg (Mike Marshall).

So. Helene and Catharine meet back up, and Helene, with some degree of uncertain eagerness, takes it upon herself to feed Catharine. Catharine needs human blood, or human flesh, or both. The film's original title is La Morte Vivante, which means "living death," so even if you choose to go by that title rather than the Americanized The Living Dead Girl, you still get some Romero color to it all. And this film is quite gory, occasionally in the way Romero had, at that time, recently become famous for. Even so, Catharine seems less like a zombie than a vampire, or vampire/zombie hybrid, and the relationship between Catharine and Helene prefigures, a little bit, the one between Eli and Oskar in Let the Right One In. The other side of the Helene/Catharine relationship is what was it exactly before Catharine died (we never find out how she died, by the way)? It seems pretty clear to me that it was a romantic and sexual one, but Rollin is never explicit about that. Which is the other thing about Rollin. I've said this before, but nudity and sex in his films can often function in ways that carry it beyond exploitation. There's a fair amount of nudity in The Living Dead Girl, but none from Marina Pierro, and, it should almost follow, and does here, no sex between Catharine and Helene. So if they are lesbians, they're lesbians just because the characters are lesbians, not for titillation.

Anyhow, the ending of the film is where the fascination really (pun not intended, but also unavoidable) begins. And I don't care to give it away. But the "emotionally incendiary" is just part of what makes the last ten or fifteen minutes of The Living Dead Girl so unusual. The other part is that at one point Rollin very consciously tells his plot to go right out and fuck itself, in a way that might strike some viewers as absurd, but which played to me as an invigorating refusal to be hemmed in by what more narrow-minded individuals would consider the necessities of formula. It's pretty obvious to me at this point that formula didn't interest Rollin at all, but rarely have I seem him say as much with such vigor. And then, yes, that "emotionally incendiary" climax...I'm here to tell you, Tim Lucas ain't wrong. It ends with a howl of despair and loss and blood and meat, and it can't be quickly forgotten. 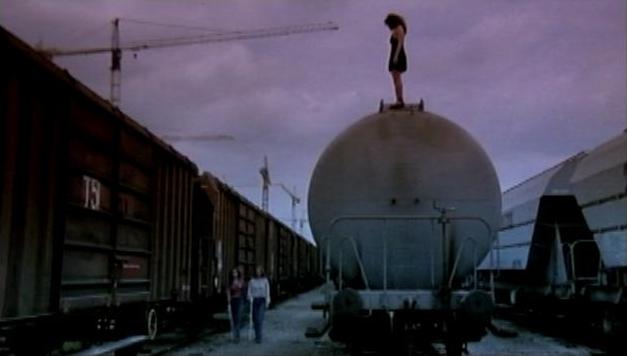 Two Orphan Vampires - More abstract, weirder, clumsier, shaggier, and occasionally more haunting is this film, which, Tim Lucas's essay informs me, was being prepared shortly after Rollin was diagnosed with kidney failure. He would go on to live another fourteen years, but Two Orphan Vampires is even more death-haunted than The Living Dead Girl, and even more so than the vast majority of films in the genre, which you'd think would have "death-haunted" as its absolute baseline requirement, but oh well. Two Orphan Vampires (which has, by a huge margin, the least amount of nudity of any Rollin film I've seen so far, a point that may seem irrelevant and childish to you, but which I nevertheless find genuinely interesting) stars Isabelle Teboul and Alexandre Pic as Henriette and Louise, two young vampires who are, indeed, orphans, and who are also blind. As the film begins, they are being adopted out of the Catholic orphanage run by kindly nuns by Dr. Dennary (Bernard Charnace), an eye doctor who is intrigued by the enigmatic nature of their vision loss, but whose actions are inspired by his being naturally good-hearted.

What Dennary doesn't realize about these sweet young ladies is that, for one thing, they're vampires, and for another they actually can see, sometimes -- at night, specifically, when they can "see blue," a visual idea that manifests itself through Rollin's camera in about the way you'd expect. But it's at these times that the girls go hunting, and while we see the whole film from their point of view, and while we can even sympathize with Henriette and Louise, Rollin doesn't choose, as so many others would, to portray any of the victims as flippantly unlikable. You don't generally know much about them, but Rollin stages these killings with an eye towards morally unbalancing the viewer -- you might want to like these girls, but you never can quite, and if you think you can then you're fooling yourself. One killing in particular is chilling in its...not casualness, exactly -- it's the one time when the girls actually aren't that casual about what they're doing -- but I suppose its almost Chabrol-like directness. These girls are vampires, but for whatever reason -- the fantasy element of such stories, probably -- when a vampire kills someone it's never thought of as "murder." But this one, this is murder.

None of this gets across what an odd film Two Orphan Vampires really is. The girls travel outside even during the daytime, when they are, in fact, blind, and often they will meet someone, another woman, another horror creature...one time they meet a female werewolf, untransformed at the time, and another time they meet what I guess is a kind of vampire queen, who protects them for a night. This stuff is, as you'd guess and as I've implied, quite odd, and not entirely successful. It's strange enough to be interesting, but not good enough to work. Still, these scenes do fit into the film's overall rambling, plotless vibe, which itself fits into what is at the film's heart.

Which is what? Also odd is how vampire-like Henriette and Louise are -- they have fangs, but the story they relate to each other -- each is the only one the other has to talk to, no matter how kind anyone else is -- is about a never-ending life, or death, or living death, or death in life. They talk about being killed, but they always seem to, eventually, come back. This isn't something we ever witness, but I have no reason to doubt their word. So the film is about the existence of these girls, and their friendship and love (this relationship appears to be platonic), and essential loneliness and need for each other. Occasionally the film can take on the air of your typical French coming of age film, as when Henriette and Louise con their way into buying a bottle of brandy, and we see them giggle as they nervously sip their way through it. That Rollin can make a film that is that, as well as being the bizarre horror film it is on its surface, is quite impressive. More impressive still is Rollin's ability to surprise and thrill this late into his career.
Posted by bill r. at 11:03 PM