Who Goes There? Too! 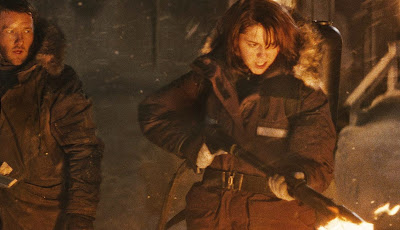 It's not a remake, though. What it is, is the story of the Norwegian base, the last survivors of which we see dying -- one by accident, one from a gunshot fired by Donald Moffat -- at the very beginning of the 1982 film, as they pursue a dog through the Antarctic snow towards the American base, where that dog, which is not a dog, will cause all manner of shit to go down. With the knowledge that Van Heijningen's film was not a remake, I'd decided that if it ended with some distant, Donald Moffat-esque figure shooting the new film's sole survivor, then I would have to give it some credit. And Heijningen and screenwriter Eric Heisserer do sort of do that, recreating early shots of the Norwegians' helicopter pursuit of the dog from the Carpenter movie, but this film cuts quickly to black before the two Things can bleed together too completely. Okay, fine. But I can't actually offer up the credit I'd promised because these final moments of The Thing (not even The Thing: The Beginning?) reek of reshoots. This is pure speculation, but it's easy for me to imagine the filmmakers becoming nervous about announcing to the world that they were unquestionably remaking Carpenter's beloved and fiercely protected classic -- though admittedly a similar announcement did not end up hurting Zack Snyder's Dawn of the Dead at all -- and decided they could rejigger the whole thing, with minimal effort, into a prequel. This one self conscious nod to its predecessor is intercut with the closing credits, after all.

But I'm probably wrong. For one thing, I doubt any plans to reconfigure the film could have reasonably included going back and adding a bunch of Norwegians to the cast, so they were probably there from the beginning. It also logically follows, what with all the Norwegians, that we're not dealing with the same group of characters. I mean, they do pretty much all the same stuff, but, for instance, the MacReady stand-in here is named Kate Lloyd, and is not played by some Kurt Russell type, not even whoever the female equivalent of a Kurt Russell type would be, but by Mary Elizabeth Winstead. Who is very pretty, a statement I make not to belittle her or her gender, but to simply get it out of the way, because I was going to point it out eventually, so why not now? In fact, Winstead is quite good in the movie. She plays a scientist who realizes that The Thing is a space alien who can mutate and take the forms of others, and, like Russell's MacReady, eventually uses a flamethrower a lot. But Winstead plays Kate as smart and professional and as reasonably terrified as everybody else would be, and she even manages to get across the certain flinty element the character needs to survive. So that's good, and really I would not be able to single out any of the performances in this film as bad. The whole film is very capably put together. 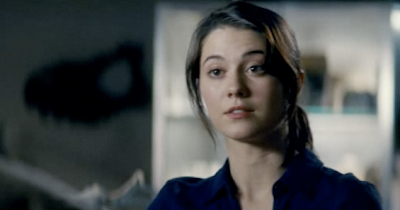 See? Pretty.
It's also a remake of John Carpenter's 1982 film The Thing. I can't even add "in all but name," because it uses the same title. It's the exact same story, which you might assume even if you did buy the snake oil that this is a prequel -- after watching the 1982 film, certain assumptions can be made about what went down in the Norwegian camp -- and all Heijningen and Heisserer have done is they've taken a handful of Carpenter's most memorable scenes and tried to create their own versions. This is sort of like what people do when they remake things.
A lot of stuff gets redone in this. You have some version of the Copper/defibrillator scene, although less dramatic, you have their take on Richard Masur's sudden exit, although less dramatic...like that. The single biggest indicator of what kind of movie this new The Thing is, is their approach to the original's blood test scene. As I'm sure you remember, in that film a test is devised to find out who among the characters is not who they appear to be, but rather a transformed and deadly thing -- the basic idea being that every part of the alien is sentient and alive with nerves, so that if everyone gives a blood sample, a heated length of wire can be applied to the blood, which, if it's not human, will react violently. This scene is a classic, a small masterpiece of suspense and horror. In Van Heijningen's backdoor remake, you know, wouldn't be neat if sort of the same thing was done, but different and new, but exactly the same? Sure, I suppose so. Somebody landed on the idea that these aliens, when transforming their bodies to resemble specific humans, can't replicate inorganic matter. This is logical enough. So Kate Lloyd takes a little flashlight and looks in everybody's mouths, at their teeth, trying to find fillings. O...kay. It's not that this makes no sense, but more that it's inherently a mighty lame thing to watch someone do in a movie. It generates not one ounce of suspense, and it manages to not do this rather brilliantly. Watching Mary Elizabeth Winstead shine a light into all these guys' open mouths is almost pure in its torpor, but there's this wonderful twist to it all because you know it's meant to have you on the edge of your seat, leaning forward, saying "Oh shit, I wonder if this guy will show any evidence of having cavities that have been repaired by a professional dentist..." 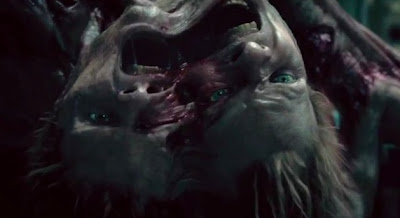 Then, too, you must consider the fact that not having fillings proves precisely nothing. In Carpenter's film, the alien blood leaps from the petri dish when poked with the hot wire, so there's your answer right there. In this one, no cavities means maybe he's pretty good at taking care of his teeth. Now, one character, an American scientist played by Eric Christian Olsen, actually makes this very point when he says "So, I'm gonna die because I floss?" The problem is that the filmmakers have no comeback to this. Four characters are separated out because they have no fillings, and the ubiquitous flamethrower is trained on them. Okay, so now what? Nothing. The film gives up. It's as though when Olsen's line was written, Van Heijningen and Heisserer looked at each other over the page and one of them said "This tooth shit isn't really working, is it?" No, it isn't, so instead of resolving the scene they have two characters we thought were dead bust in, allowing everyone to shift their suspicion to them. It's true, the fact that the alien can't replicate organic matter does pay off in another way later, but that doesn't change the fact that Van Heijningen and Heisserer's attempt to recreate one of the most iconic scenes from the John Carpenter film they are not remaking, you goddamn motherfuckers, what do you know about it, sort of just trails off, embarrassed, and unsure why they even bothered with this dumb idiot movie.
The weird part, and maybe this is just my deal, is that I will watch this again. It's by no means a terrible movie. It's not especially good, but it's fun, in the Sunday-afternoon-monster-movie-killing-loads-of-people way, which is one of the best kinds of fun, cinematically speaking. The effects are pretty decent, even, and no one can claim that the CGI folks ripped off Rob Bottin's peerless practical effects because, remake or prequel, we're dealing with the same alien, so it should mostly behave in the same way. It's just that, you know, when you think about it, the dog is barely in this thing, and then they're chasing it at the end, and it's supposed to be meaningful, but the only reason it's meaningful -- the only reason any of it's meaningful -- is because we already saw that other, much better movie, which didn't need anybody's help in telling its story. Thanks, though.
Posted by bill r. at 12:31 PM