A Clear Case of Possession 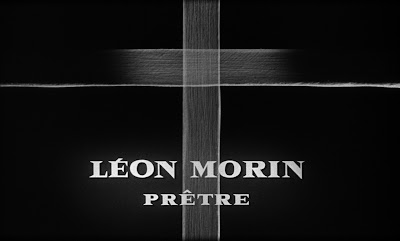 A while back, when Criterion was about to release, or had just released, Jean-Pierre Melville's Le Doulos and Le Deuxième Souffle somebody on one of the Criterion message boards bemoaned that these releases (as well as whatever titles were set to come out at the same time) were an example of the DVD company descending into "self parody." This raised a few questions in my mind, such as how is it possible for a DVD company to achieve self parody? If Blue Underground continues to release horror films, will it eventually become a parody of itself? And if this even is possible, what is it about releasing Jean-Pierre Melville films to DVD that makes self parody a danger for Criterion? I don't think it's going too far out on a limb to assume that anyone bothering to post on a Criterion message board likes movies a lot, be they domestic or international. Melville is something of a major filmmaker, though he was not very prolific -- 14 films in his liftetime, from 1945 to 1972. At the time this particular individual was accusing them of self parody, Criterion had released seven of those. One, Bob le Falmbeur, has since gone out of print, and has not yet been re-released by another American DVD distributor. To my knowledge, only one Melville title, Un Flic, is available in the US from a company other than Criterion. So when it comes to Melville, it's basically Criterion or nothing. I think I've lost track of what the original complaint was.

Except, uh oh, here they go again, with their self parodic ways: on July 26, Criterion will be releasing yet another Melville film, those idiots, this one a bit of an off-brand title for Melville, or the Melville that is primarily known as a director of crime films. It's Léon Morin, Priest, starring Jean-Paul Belmondo as the title character and Emmanuele Rive as Barny, the film's actual main character, an atheist and widow with a young daughter. These characters meet amid the day-to-day turmoil of occupied France during World War II -- the village in which the film takes place is first occupied by the Italians, who are later driven out by their ostensible allies, the Germans. Barny works as a secretary among a strange group of female friends and associates, and is driven to meet Father Léon initially because, she claims -- although this never really pans out, other than her eventually admitting to the priest what her original itentions were -- she wanted to mock him, or mock the clergy through him. But almost instantly she's smitten with the young priest, and he with her, though their relationship is one of friendly spiritual debate. At first, anyway, until the central question of religious conversion begins to bind with the sexual attraction, and deeply confuse matters.

The ad copy for Léon Morin, Priest sets up the film as an illicit romance between Barny and the supposedly celibate priest, and it is that, sort of, in part, but man is that description reductive. Barny, for instance, is not some repressed flower who suddenly swoons for the unobtainable spiritual authority figure. Rather, she openly admits, in her role as the film's narrator, to being in love with another woman, Sabine (Nicole Meril), and a third woman, Christine (Irene Tunc) apparently becomes enamored of Barny when Barny slaps her. There is a lot, in fact, of what I like to call "interesting lesbian stuff" in the film, though very little of anything that might be consummated in Léon Morin, Priest actually ends up being consummated. 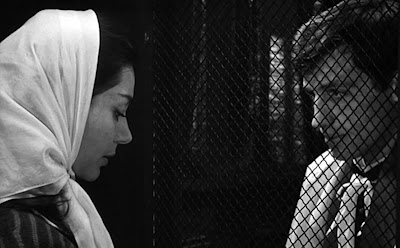 And several things that appear to be set up for eventual payoff are left alone, as part of the texture of a small occupied town. As it must have been in reality, even what we might regard as pretty big deals are treated as part of the every-day – see, for example, the casual conversation about one character’s “Vichyism”. That one almost does payoff, but not as much as you might expect, and what climax there is is sort of lost in the realization that the town has just been liberated by American forces, and Melville didn’t show it. That’s because Melville doesn’t show a lot in Leon Morin, Priest. Scene transitions are almost completely dispensed with, so that when a character has said the last line of a scene that Melville doesn’t want to go any further, there is a quick fadeout, and then back up to another scene, in another setting with no establishing shots; the characters in the new scene begin talking with no context given or needed.

Melville plays around with his style a lot here. Typically – and here I’ll stick to my experience of his work, which is not insignificant, but is also incomplete – Melville comes across, in his crime films, as one of the most technically brilliant and precise directors who has ever lived. He can be Hitchcockian, as in the billiards scene from Le Cercle Rouge (which is the scene I always point out as one of Melville’s crowning achievements, but no one ever acts like they agree or even know what I’m talking about, and I don’t get how you can not love that overhead shot of the table, and suddenly the second cue stick, and all the rest of it; this is somehow not regarded as one of the classic scenes in all of film, and I demand to know why), but is often more subtly masterful, choosing shots and placing the camera based on what must be shown, and managing to infuse it all with a cool artistry that is akin to the peak of craftsmanship, but somehow tripled. Place Leon Morin, Priest next to another World War II film by Melville, Army of Shadows, which must be one of the grimmest stories of Allied bravery ever put on screen, and which is not unlike Le Cercle Rouge in style, and you’ll see an enormous difference. There’s a lightness to Leon Morin, Priest though the subject matter is anything but, as well as an energy – that slap referred to earlier takes the form of a rushing camera taking the place of Barny’s actual physical self.

Much of this can possibly be chalked up to the difference between Melville’s black and white films and his color films, which difference I consider pretty pronounced (and I confess a preference for his color stuff, but just barely) but anyway just two sides of the same coin. The important thing is that as far as I can tell, Melville never shot a dull inch of film -- this one is full of wonderful details, such as the moment when Barny (Riva and Belmondo are outstanding, by the way) laughs at the silly, befeathered uniforms of the Italian soldiers, an one glances at her as if to say "I know how I look, and you're being rude." So not a dull inch of film did Melville shoot, and if, in the grand scheme of things, there weren’t very many inches in comparison to, say, his pal Godard, then all the more reason preserve it all, get it all out there, and the sooner the better. The less of something there is, the more there is to lose.
Posted by bill r. at 6:15 PM

The threads you reference have confounded me for years; I've never determined if some of those posters are being sarcastic or if they were genuinely angry that a company has, for example, released a silent film.

I don't think they're being sarcastic, amazing as that seems.

There is a lot, in fact, of what I like to call "interesting lesbian stuff" in the film - Bill Ryan

I think Melville could experience a renaissance if that blurb were to go on all advertisements for this film.

I've only seen one Melville at this point, and so long ago that... oh, the shame. I want now to see them all now, though, and will, by tonight!

Okay, probably "by next year" is a more reasonable assessment.

Criterion should have called me! I could have written some good liner notes about the interesting lesbian stuff, and really sold the shit out of this thing.

And yes, Greg, you NEED to see more Melville. You will adore his work. I don't think I'm stretching it to say that he's one of those guys who represents everything you (and I do mean you, personally) love about filmmaking.