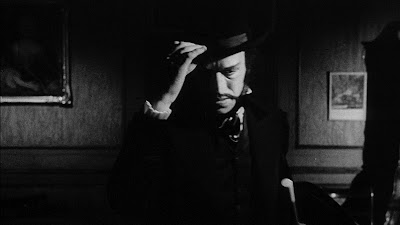 In The Magician (d. Ingmar Bergman), Max von Sydow's Albert Vogler, the titular magician and leader of Vogler's Magnetic Health Theater, doesn't speak for about a full hour of screen time. Tubal (Ǻke Fridell), the troupe's carnival barker, claims this is because Vogler is mute, but he isn't. We're given reasons to suspect this well before he actually says his first words (which, significantly, are "I hate them"), among them is the fact the his supposedly male assistant, Aman, is quite clearly a woman, and is, in fact, Manda (Ingrid Thulin), Vogler's wife. Then there's Vogler's fake beard, fake mustache, his wig...the man is a walking fraud. This, at least, is the view taken by Dr. Vergerus (Gunnar Björnstrand), a cold man of reason who wishes to expose Vogler's tricks, and publicly humiliate him.

Among the many things going on throughout the films of Ingmar Bergman, the most gripping thing to witness is his battle with God, his hopeless and desperate attempts to answer the question of the possibility of a divine existence. In interviews, Bergman often claimed atheistic tendencies, but his films reveal a much more complex picture -- even when a given film might refute the possibility of God, Bergman always respected that which he tried to leave behind him. And anyway, it's clear he could never really shake it. The Magician is one of the most interesting battles waged in this artistic and theistic war, as it's the one example I know of where Bergman depicts the skeptics, the rational, as venal, hateful, condescending little shits. Or not the only time, because check out that name: Vergerus. A not uncommon name among Bergman's deep cast of characters through his career, it also appears most memorably in The Serpent's Egg, where Heinz Bennent plays a man by that name who is not only a proto-Nazi (the ur-Nazi, perhaps), but whose approach to science and the rational is almost literally Satanic.

This Vergerus ain't that bad, but he's a cruel and petty man who must protect his worldview. Vogler's magic, however easily exposed (or is it? Certain things that happen in The Magician are eventually explained; others are not) allows for the possibility of belief, yes, but more importantly of emotion. "A momentary fear of death" is something he makes one man feel, in an attempt to shake the man to his core, to blast his certainty out of its comfortable hole for at least an instant. Vogler must be exposed, according to Vergerus and the other leaders of the village where Vogler has come to perform, because a failure to prove him a phony would "be a catastrophe for science", opening the world up to the possibility of God. "How out of date!" cries one of Vergerus's cronies. In The Magician, as today, the question of the universe's origin is reduced to a competition.

I don't claim to know what Bergman ultimately believed, nor do I really care. Hell, I take the man at his word. But over and over again in his films, he reveals himself to believe most in the necessity of the question. Vergerus says he detests the inexplicable; what Bergman detests is certainty.
Posted by bill r. at 8:03 PM

I've been putting off this one until I can read Chesterton's play (which is considered pretty minor, so much so that even a Chesterton junkie like myself hasn't gotten to it). It's an odd fact that someone as dour as Bergman is one of the few people whose brought Chesterton to the screen (and from your description I'll take it that the film is not a bowl full of chuckles).

As for the question of Bergman's faith I think you're dead on in your observation about certainty. But I've always found John Updike's phrase "The inability to take the leap of unbelief." To be useful. It's one thing to know something and another to feel it.