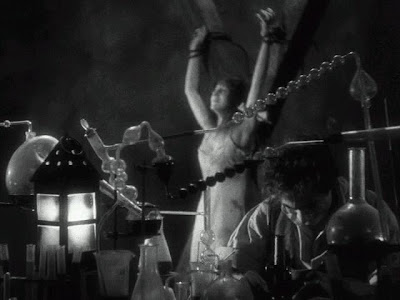 The half-assed way in which certain classic films pay homage to their literary source material always both amuses and confuses me. In my experience, the zenith for these sorts of references was reached in Rouben Mamoulian's Dr. Jekyll & Mr. Hyde, in which the narrator and protagonist of Robert Louis Stevenson's original story is heard being greeted off-screen, but then never appears, and is never mentioned again. Similarly, in Universal Studio and Robert Florey's 1932 adaptation of The Murders in the Rue Morgue, Edgar Allan Poe's brutal and bizarre chronicle of a series of murders which, it is learned, were perpetrated by an orangutan, Poe's detective, C. Auguste Dupin, is both dismissed and represented in the form of the medical student hero named Pierre Dupin (Leon Ames, credited here as Leon Waycoff). Why Pierre? What was wrong with, at least, Auguste?

At least he's there, though, while pretty much the rest of Poe's story is gone. In the film, Poe's idea gets strained through Universal's apparent obsession with mad scientists, in this case appearing in the form of Bela Lugosi as Dr. Mirakle, a carnival showman and secret experimenter in the field of human/ape genetics. He works in the carnival for money, but his passion is finding a human female whose blood is as compatible with Erik -- Dr. Mirakle's ape -- as he can possibly find. This quest leads to the kidnapping of women, the injecting of ape blood into those women, and the eventual disposal of the women's bodies after they've died from having ape blood injected into them. After noticing the positive reaction Erik had to her when she attended their carnival performance, Mirakle soon has his eyes on Camille (Sidney Fox), believing that she will have the kind of blood he so desperately needs. As Camille is Dupin's girlfriend, the source of Mirakle's downfall is not hard to root out.

At 61 minutes, The Murders in the Rue Morgue has no more plot to summarize. The strange thing about the film is that as goofy as it is on paper (and sometimes on film, considering that Erik is presented in shadow and long-shots as a man in a vague, catch-all ape suit, and in close-up as a real chimpanzee, by way of stock footage, and referred to as a baboon), it's hard to say the film ever really steps that far wrong. It looks gorgeous, thanks to the basically infallible Karl Freund, who pulls cinematographer duties here, and it's also full of the kind of strange, and possibly not always intentional, subtexts that frequently marked Golden Age horror movies. For instance, if you check out that image posted at the top, you might see in it some of the dark sexuality that often found its way into these films, where young women in peril frequently also ended up being women bound up and strapped down.

That's Arlene Francis, by the way, and her character, and her introduction, adds a fuzzy class element to the proceedings. Dr. Mirakle finds her on a Paris bridge, watching in horror as two men engage in a knife fight (presumably over her) that ends with both their deaths. Mirakle then swoops in, pegging her as his next guinea pig, only to find later that the contents of her veins aren't what he's after. As she hangs there in his lab, near death, Mirakle rages at her, calling her blood "rotten", and "as black as your sins!" Francis's character is listed in the credits as "Woman of the Streets", and Camille is of a noticeably higher social tier than she -- so what, exactly, are Mirakle's criteria for his blood? To Mirakle, Erik, his ape, is every bit as human as these people he so despises, but perhaps, following a thought process that might be considered counter-intuitive in a person who would think like this in the first place, the people from whom blood should be poached, the people who most closely resemble our nearest animal neighbors, are the people live farthest from the wild.

Then, of course, there's the Scopes Monkey Trial, which would have been a mere seven years old when Florey's film was released. Poe's story (which was first published in 1841) could be seen to be about the dangers of a non-human pretending to be human, having learned only the most superficial behavior from a distance. As this danger leads to violent death (and one of Poe's uncomfortably imaginative murders does make its way into this film), Poe's orangutan could be a stand-in for amoral, sociopathic killers throughout history. But Poe would not have had Darwin available when he wrote his story, and while Darwin is not mention in the film, Dr. Mirakle does tell his carnival audience that humans are descended from apes like his friend Erik. These remarks are met with cries of "Heresy!" and, indeed, Mirakle is not only never able to prove his own lunatic version of Darwin, but he eventually meets his end at Erik's hands. The Scopes trial didn't sit terribly well with everybody, after all, as you might be aware. Then again, Erik still has his eyes on the decidedly human Camille, and hauls her along on his frantic escape, which, you know, sort of brings to mind Cooper and Schoedsack's King Kong, which was, at the time, still a year away.

I've always been amazed, throughout film history, how many times a very good, interesting and well written story is tossed aside for the sake of a much less interesting, much less well written story. Not that I mind any of these Universal movies because I don't, I love them. It's just that you can't help but wonder, "Why bother calling it 'Murder in the Rue Morgue?'" Are there really so many rabid Poe fans that it's going to pull them in by the millions? And if so, wouldn't they be kind of pissed?

But more importantly, why not actually do the story?! It's a great detective story! See, that's where I get confused but who am I to argue with Bela Lugosi yelling at someone that their blood stinks?

As I implied, the only sorta theory I have is that, at the time, studios were just caught up in mad scientist movies, and any literary property they could conceivably repurpose in that way, they'd jump on it. But still, it doesn't make sense because Poe's original story is brilliant, still unlike any other detective story I know.

Seriously, though, that bit in DR. JEKYLL & MR. HYDE is actually kind of hilarious, if you know the story. That's another detective story, in structure, that was changed to be more directly about a mad scientist (which it is anyway, but they removed any cushion between the premise and the telling), but it's still basically Stevenson's idea. But Stevenson tells the story from the point of view of Jekyll's friend, Utterson, who is trying to figure out the mystery. In the film, because that structure was dropped, there's no Utterson. Even so, early on, at a party someone says something like "Oh, Mr. Utterson's here!" And that's it. We never see him, we never hear anything else about him. Why bother?

Ultimately, though, I agree with you -- this RUE MORGUE is a lot of fun regardless, so I'm not going to kick up a fuss about it. Plus, I'm not a big Lugosi fan overall, but he's really pretty good here.

Arlene Francis?! I've always assumed that she, like Walter Matthau, was born 55 years old and stayed that way for a long, long time.

I still think you're right about Matthau, though. I've seen his early stuff, and he never looked younger than 40. Johnny Cash was one of those guys, too.

"This quest leads to the kidnapping of women, the injecting of ape blood into those women, and the eventual disposal of the women's bodies after they've died from having ape blood injected into them."

Man I did not expect to come across that series of sentences tonight. I'm oddly glad I did though.

It's a common scientific practice, Bryce. I don't know why you find it so unusual.